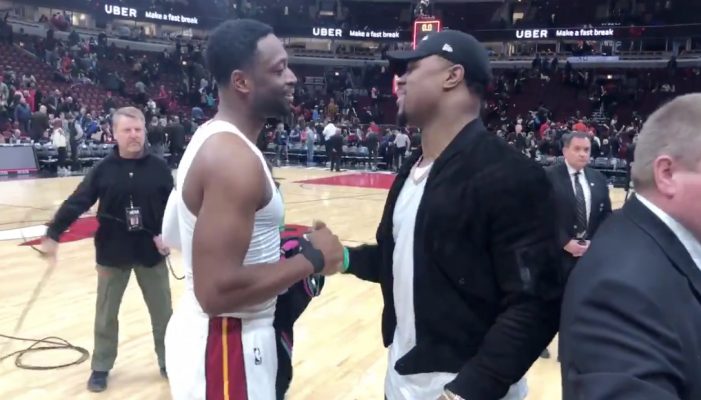 Miami Heat guard Dwyane Wade took time to pay homage to his hometown Chicago Bears after the Heat-Chicago Bulls game on Friday, as he signed a Heat jersey for linebacker Khalil Mack.

Khalil Mack got a signed D-Wade jersey after the game ?

That’s a bad boy right there. @k52mack_ and my @chicagobears got the city on fire. Thanks for the love my brother. #BearDown #MackAttack

The Bears have enjoyed an abundance of success lately, as they currently boast a five-game winning streak. They possess a 8-3 record, sitting first in the NFC North division. Wade spoke on the team’s recent success before tip-off against the Bulls:

“We had to endure a lot, but to see this team come together, kind of unexpectedly, the way they have, to be able to go on this five-game win streak the way they have, it’s been impressive just to watch this whole year. As a fan, you just enjoy it. So I’m really enjoying the ride and want to continue.”

Wade also noted that acquiring Mack was an important move for the Bears that helped change the mindset of the fan base and, of course, the guys on the field.
[xyz-ihs snippet=”HN-300×250-TextnImage”]