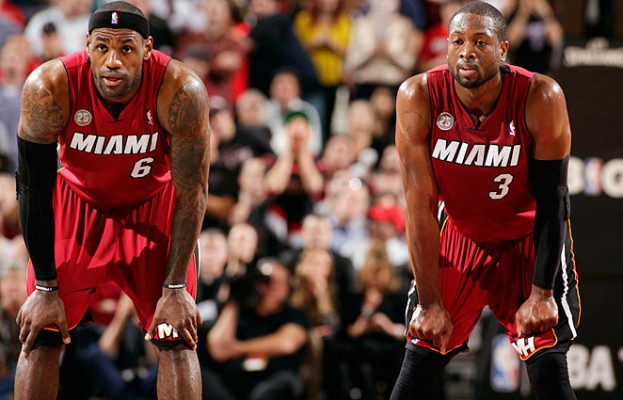 Dwyane Wade re-signed with the Miami Heat in the summer of 2010. And when he did, stars LeBron James and Chris Bosh signed to join him in Miami.

It was the start of something great. Over the next four years, the Heat made the NBA Finals four times, won the championship twice, and saw James win MVP twice.

They were the best four years in franchise history. And they apparently almost occurred for another team.

On a recent episode of the “Knuckleheads” podcast, which is created by The Players’ Tribune, Wade admitted that he and James almost joined the Chicago Bulls or New York Knicks.

Wade on first talking to LeBron about teaming up. (via The Players’ Tribune) ‪ ‬#MiamiHeat #Heatvshaters #HeatNation #dwyanewade #lebronjames

“When we was trying to make a decision of what city we wanted to play in or what we wanted to be, we had to keep our options open. Chicago was on the top of both of our lists. And they had to offer two max contracts and a young D. Rose (Derrick Rose). They had a Luol Deng, they had [Joakim] Noah, they had all these pieces. So I’m like, ‘In Chicago? In one of the biggest markets?’ … We looked at New York. And when it came down to it, Miami was the only team that had enough money to get all three of us. Every other team could’ve did two. But once it got to the point where it was like, ‘Yo, C.B. is the perfect match.’ Ultimately, bro, I just wanted to win.”

Safe to say that worked out pretty well for Miami.
[xyz-ihs snippet=”HN-300×250-TextnImage”]