Dwyane Wade Goes All Out for Gabrielle Union’s Birthday, Brings Out Surprise Celebrity 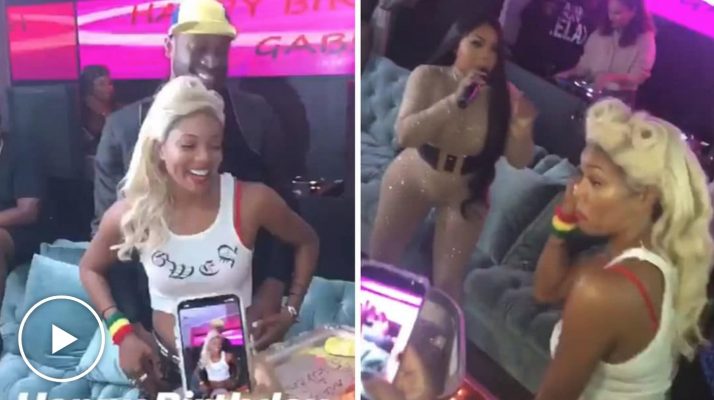 Dwyane Wade pulled out all the stops Saturday night for his wife, Gabrielle Union, to celebrate her 46th birthday with nonstop surprises. The ’90s themed party featured Wade, Union, and a group of friends after the Miami Heat’s win over the Portland Trail Blazers.

Wade decided to pull the epic move in vintage, as he donned the Will Smith House Party costume from an episode of the ’90s show “Fresh Prince of Bel-Air.”

Gabrielle Union matched his ambiance by styling a Gwen Stefani costume wearing a blonde wig and Stefani’s signature red lipstick. During what appeared to be the middle of the party, Union and Wade were both dancing to a few Lil’ Kim songs when the rapper appeared from around the corner sending Union into utter excitement.

Wade had apparently planned for the DJ to play one of Union’s favorite Lil Kim songs “Jump Off,” in which she joined the Brooklyn native rapper in singing along.

The outing itself comes as no surprise, as Union and Wade both have been the life of the party ever since they started dating. Costume parties have become a regular for the couple as they’ve always looked to oust the competition at an event. Just last year for Halloween the couple dressed as the ’90s R&B duo group Milli Vanilli.
[xyz-ihs snippet=”HN-300×250-TextnImage”]