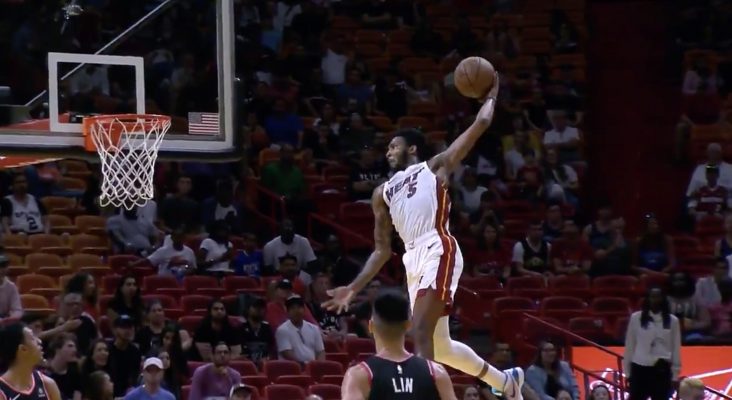 The Miami Heat lost to the Toronto Raptors on Sunday evening, 125-104.

While the final score doesn’t indicate that there was too much excitement for Heat fans during the game, Heat star Derrick Jones Jr. gifted the American Airlines Arena crowd with one of the best dunks of the 2018-19 NBA season.

Jones has already made a name for himself as one of the league’s best dunkers, but this display of athleticism and strength is simply incredible.

The dunk was so impressive, that one fan has already taken to Change.org to make a petition stating that the NBA should change the league’s logo to a still of Jones’ slam.

Unfortunately for the Heat, Jones’ dunk was not an exclamation point to what could have been a huge win for the club.

A victory over the Raptors would have strengthened Miami’s hold on the eighth seed in the Eastern Conference standings.

They’ll look to right the ship in their next game against the surging Detroit Pistons on Wednesday.
[xyz-ihs snippet=”HN-300×250-TextnImage”]