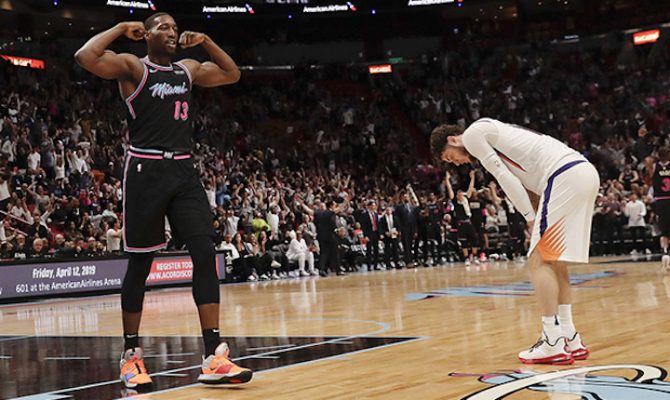 One unwritten rule when it comes to playing against professional basketball players is to never get them riled up.

Apparently, one amateur baller wasn’t aware of that rule when he went up and talked trash to Miami Heat center Bam Adebayo during a Miami Pro League game recently.

In the short clip, Adebayo annihilated his cocky opponent by scoring against him on one end and blocking his shot at the other, sending a clear message that the young NBA star should be taken seriously.

Also notable in the video is the 6-foot-10 big man’s excellent ball-handling skills.

The Heat have high hopes for Adebayo, who is expected to become a key player for the franchise this season and beyond.

Though his 2018-19 season averages of 8.9 points and 7.3 rebounds were nothing to get too excited about, a late-season surge gave head coach Erik Spoelstra reason to be optimistic for Adebayo’s future.

In his last 20 games, Adebayo averaged 11.8 points, 9.0 rebounds and 1.2 steals in 26.7 minutes of playing time. He also shot a sizzling 61.1 percent from the field, including 33.3 percent from 3-point range. That’s a vast improvement over his season average of 20.0 percent from beyond the arc.

On top of that, his game should blossom now that Hassan Whiteside is no longer around to take minutes away from him.

Expectations for Adebayo this year are high, but he appears to be ready to exceed them.

Bam AdebayoFeaturedhassan whitesidemiami heatNews Ticker
← Previous Story Video: Ray Allen Explains Why Losing Is So Important as a Kid
Next Story → Hassan Whiteside Doubles Down on His ‘We Got Shooters’ Comment With Another Jab