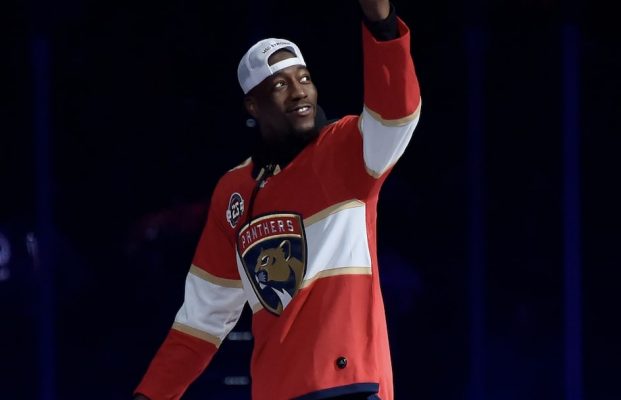 It’s always nice to see a professional athlete supporting their city’s other sports teams. On Thursday night, that’s just what Miami Heat center Bam Adebayo did when he participated in the Florida Panthers’ ceremonial puck drop.

The 2017 first-round pick came out onto the BB&T Center ice in a No. 13 jersey alongside the team mascot, Stanley C. Panther.

After dropping the puck, he exchanged handshakes with Panthers captain and star center Aleksander Barkov as well as Calgary Flames star Mark Giordano.

Adebayo later took to Twitter to reflect on his experience.

@FlaPanthers Those Chicken Nuggets Were ?? I’ll Be Back Soon ?? https://t.co/XPDXHeGbcO

Adebayo’s NHL appearance marks the first night of his – and the Heat’s – much-needed All-Star break.

After Wednesday’s win over the Mavericks, the Heat have an entire week off before facing the Philadelphia 76ers on Feb. 21.
[xyz-ihs snippet=”HN-300×250-TextnImage”]