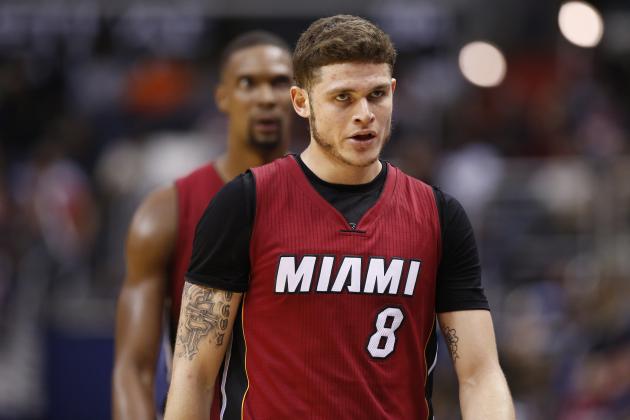 Tyler Johnson underwent successful surgery for a left shoulder injury earlier this week—but it does not mean that he’ll be back this season.

Johnson commented on his recovery and stated that there’s no guarantee he’ll be back for the playoffs, via Manny Navarro of The Miami Herald:

“The doctors said it’s going to be two to three months before I can resume contact. It’s a possibility (I could be back for the playoffs). But we’ve just got to see.”

The second-year guard had played a major role for the Miami Heat this season as the primary point guard off the bench. Due to an injury to Goran Dragic, Johnson had seen increased playing time recently, before being sidelined for good following the January 26th game versus the Brooklyn Nets.

The 23-year-old guard had averaged 8.7 points, 2.2 assists and 3.0 rebounds in 36 games and five starts this season. Johnson stresses patience regarding his recovery:

“Again, we’re not trying to rush it back. If it feels healthy by then, and I’m actually able to contribute and not just be out there trying to figure it out during the playoffs, [then I’ll play]. [The playoffs are] not the time to try and figure out if you can go. If there’s a couple practices before it, I’ll try and practice and figure out what I can do.”

Considering the Heat are in the middle-of-the-pack regarding playoff seeding in the Eastern Conference, the team hopes Johnson will be healthy enough to return at some point this season.
[xyz-ihs snippet=”Responsive-Ad”]