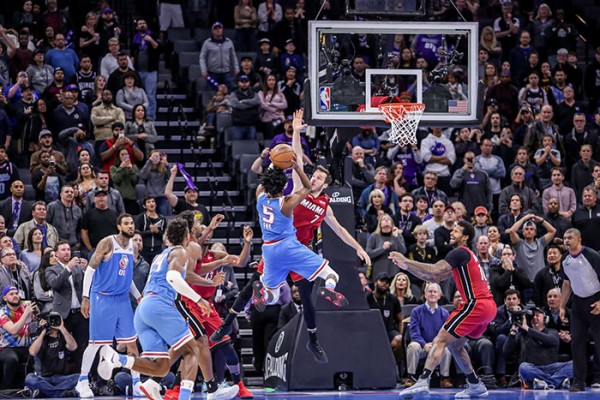 A pair of questionable calls in the final 10 seconds of regulation of the Miami Heat‘s Wednesday night 123-119 overtime road loss to the Sacramento Kings ended up costing the Heat an opportunity to win the game. On Thursday afternoon, word arrived that both calls were wrong, adding to the aggravation of suffering the upset loss.

Heat again on wrong end of missed calls according to L2M, both in regulation. Dragic was fouled with 10.5 secs to play that turned into Heat 24 sec. violation. Kings took more than 5 secs to inbound ball with 9.3 secs to play.

The L2M stands for the Last Two Minute Report, which is an NBA report defined as such on the league’s website:

That criteria is then explained:

“Effective with the 2017-18 season, an L2M will be done for any game in which one team’s lead over the other is three points or fewer at any point during the last two minutes of the fourth quarter or overtime.

At the time of the non-foul call on Goran Dragic, Miami was leading 110-109 and would have had a player at the line who had made 8-of-9 in the free-throw department for the game. Instead, Dragic was unable to get a shot off and was whistled for a shot clock violation.

Sacramento was not called for a five-second violation on the subsequent inbounds play. While the Heat managed to get the ball back, Kelly Olynyk split his two free throws and the Kings’ De’Aaron Fox connected on a buzzer-beater to send the game into overtime.

The defeat and subsequent recognition of the two mistakes was especially frustrating in light of the fact that the Heat had charged back from a 15-point deficit with 8:33 left in regulation.

The Heat conclude their brief three-game Western road trip on Friday night with a game against the Los Angeles Lakers. Tipoff is set for just after 10:30 p.m. ET.
[xyz-ihs snippet=”HN-300×250-TextnImage”]