Report: Miami Heat to Be Without Several Key Players vs. Phoenix Suns 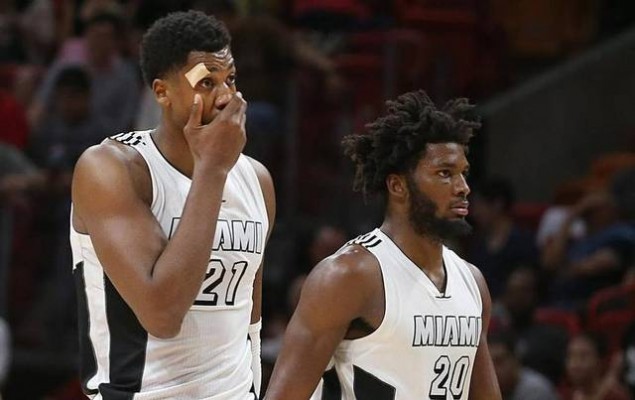 The Miami Heat will once again be shorthanded as they begin their six-game, West Coast road trip as the team announced that Hassan Whiteside, Justise Winslow and Josh McRoberts did not travel with the team to Phoenix.

INJURY UPDATE: Hassan Whiteside (eye), Josh McRoberts (foot) and Justise Winslow (shoulder) did not travel with the team to Phoenix.

Whiteside is recovering from a right retinal contusion and missed his first game of the season against the Detroit Pistons on Sunday. He had suffered the injury when he got tangled up with Boston Celtics forward Jae Crawford last week.

Winslow suffered his right shoulder “stinger” on the last play of that very same game against the Celtics. He said he wasn’t too worried about the injury and that he “would be fine.” The second-year forward had missed 16 games earlier this season with a sprained wrist.

Also, McRoberts remains sidelined with a stress fracture in his left foot. He is expected to be out for an extended period of time.

On the other hand, both Goran Dragic and Dion Waiters were able to travel with the team and hope to play during the trip. Dragic has missed three out of Heat’s last four games due to back spasms but joked on Sunday that he wouldn’t miss the game against the Phoenix Suns, his former team. At practice, Heat head coach Erik Spoelstra said Dragic would be a game-time decision for Tuesday’s game.

Waiters has been out since Nov. 28 with a groin injury (19 games) but looks to be close to a return. He went through practice Monday in Phoenix but no determination has been made about his availability.

“But if I’m on the road, man, I’m playing,” Waiters said Sunday. “I’m trying to play. That’s my whole main focus right there, just trying to get back out there.”