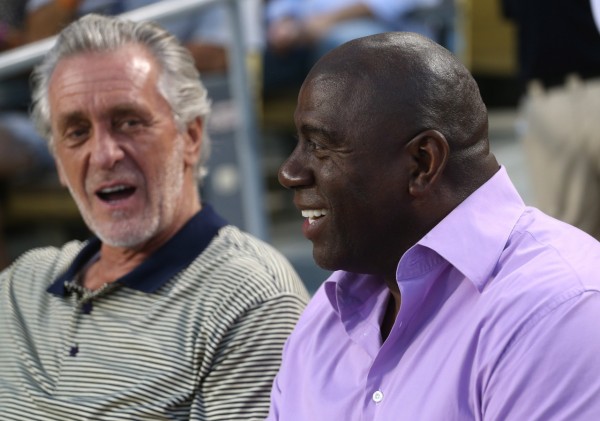 Magic Johnson was one of the central links to the Los Angeles Lakers‘ dynasty of five NBA championships and eight appearances in the Finals during the 1980s. The head coach of those teams was current Miami Heat president Pat Riley, who’s been a part of all three of the franchise’s titles during his long run as team president. So it makes sense that Johnson would seek to tap into the knowledge of Riley as he gets ready to handle basketball operations for the Lakers.

One of Johnson’s first directives in his new role is to issue an edict that demands that Lakers players come into the team’s September training camp in prime physical condition. Such a philosophy was the byproduct of talks he recently had with his old mentor.

.@MagicJohnson tells us Lakers players need to be in world class shape. Says, he got that from Pat Riley… who he's chatted with recently

During an appearance on Sedano’s radio show, Johnson noted how important conditioning has been to the two teams headed to their third consecutive Finals: the defending champion Cleveland Cavaliers and the team they dethroned last year, the Golden State Warriors.

Riley has previously noted how the role of taskmaster with his players in the area of conditioning, which has been passed on to current Heat head coach Erik Spoelstra, helped the Heat completely reverse an 11-30 start in a playoff drive that ultimately came up agonizingly short:

“I give them the credit because they took advantage of something that a lot of players sometimes wouldn’t do it, or do it half assed,” he said. “These guys went all the way and I was so impressed and proud of them. Then they saw the results of that. So we moved it up from best condition to world class.

“And I think world class is what it’s about. If you don’t want to be a world class athlete then what are you doing? You’re wasting your time. All you’re doing is making money and probably having a short career and being very frustrated. In order to get the best out of yourself, you have to get to this point first and then let the coaches take care of the development part and let the head coach take care of how he sees you as a world class athlete developing your skills.”

Johnson recalled his days playing for Riley, noting how much they ran:

“We ran for 45 minutes straight before we even shot the basketball,” Magic said. “We were in such great condition that we could run for four quarters.”

The current difference between the Heat and Lakers is that Riley’s team is a potential playoff contender, while the rebuilding Lakers will have the second overall choice in next month’s NBA draft. Los Angeles could choose Lonzo Ball, which would put Johnson in the crosshairs of Ball’s controversial father, LaVar, someone who’s already stepped on many toes within the NBA. Johnson may ramp up his conversations with Riley if that situation becomes explosive. For now, Johnson will be content to stick to the fundamentals laid out by Riley.
[xyz-ihs snippet=”Responsive-ImagenText”]