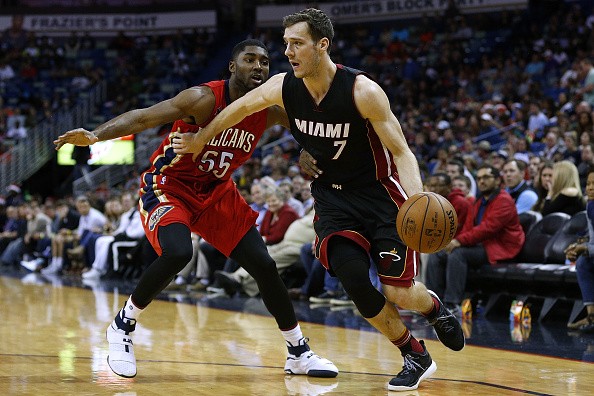 Starting point guard Goran Dragic is the latest player to be added to that long list of injured Heat players, as he hurt his back against the New Orleans Pelicans on Dec. 23, and has been dealing with lingering back spasms since.

The 30-year-old played Thursday night versus the Charlotte Hornets in a losing effort the hurting guard regrets taking part in, per Anthony Chiang of the Palm Beach Post:

“I feel like I shouldn’t have played [Thursday],” Dragic said before Friday’s game in Boston “But I gave it a go, so I think it’s smarter to get better and not to hurt the team like that — to be on the court and not moving well.”

The nine-year veteran put up an uncharacteristic five points on 2-of-11 shooting, eight assists and four turnovers in Charlotte, a severe drop-off from what the guard has been producing as of late.

When asked if the back issues could be a potential long-term problem, Dragic gave a conservative response but didn’t rule out the possibility of missing extended time:

“I’m hoping not. The back is kind of tricky. The only thing that I can say is I’ll go day-by-day and see how I’m going to feel.”

Already the third-worst team (10-24) in the Eastern Conference, the Heat can’t afford to lose Dragic. The guard is posting his best numbers in a Heat uniform with 18.8 points, 6.7 assists and 2.3 rebounds a game.

The Heat return home to take on the Detroit Pistons on Sunday at 6:00 p.m. ET.
[xyz-ihs snippet=”Responsive-ImagenText”]