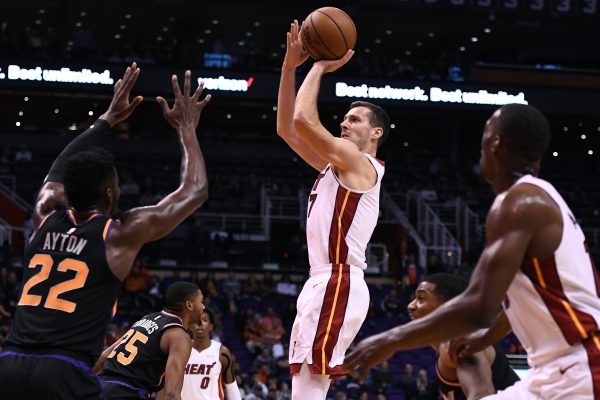 The Miami Heat will be without Goran Dragic on Wednesday night, as the point guard will sit out with a swollen knee.

“His knee was sore after the game,” Spoelstra said Wednesday, referring to Dragic after Monday night’s loss to the Los Angeles Lakers.

This is extremely concerning for the Heat. They held Dragic out for eight games, gave him a rest day on Saturday, limited his minutes on Monday, but his knee was still sore following the game.

“We’ve been dealing with it for a month so the situation basically is the same,” Heat head coach Erik Spoelstra said of the injury.

The sore knee is something that has plagued Dragic for much of the season despite the Heat’s cautious approach. His knee has kept him out of games dating all the way back to early November.

Dwyane Wade has dealt with his own knee issues throughout his career so he can empathize with Dragic. Prior to Wednesday’s game against the Utah Jazz, Wade discussed his own experience with knee problems and the frustration that comes with the injury.

“It’s frustrating,” Wade said. “It messes with everything, from the standpoint of your family life, what kind of mood you’re in. Obviously, someone special like Goran who loves to play this game, it messes with your confidence. So it messes you in so many different ways. It sucks. Point-blank, period, it sucks.”

Dragic’s health is definitely affecting his play. As a result, his production has dropped this season. When healthy, Dragic is capable of playing at a high level, but he hasn’t looked like himself as of late. It’s easy to forget that Dragic was named an All-Star last season.

Despite their rocky start to the season, the Heat are currently only a half game behind the Orlando Magic for the eighth seed in the Eastern Conference. They’ll likely need a healthy Dragic if they want to make a run at the playoffs. His knee problems are definitely something that should worry Miami moving forward.
[xyz-ihs snippet=”HN-300×250-TextnImage”]