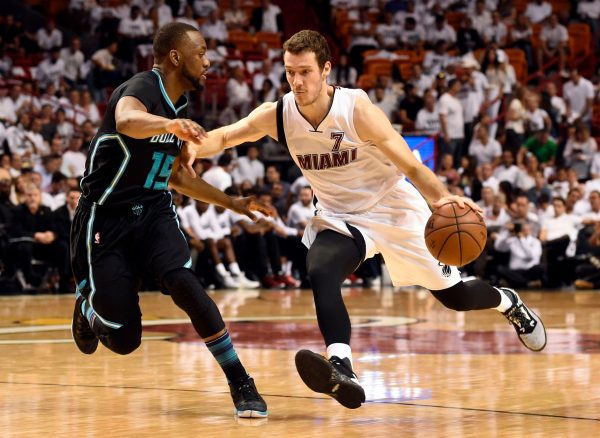 For the last week, the Miami Heat and Minnesota Timberwolves have been flirting with the idea of a trade to send Jimmy Butler to South Beach.

A potential deal lost steam over the weekend, and the saga ended with both sides at a standstill. Even though Butler has Miami high on his short list of landing spots, Tom Thibodeau and the Timberwolves are coming off as reluctant to trade the 29-year-old star.

Trade rumors rise again tonight as Minnesota has a scout in attendance while the Heat play the Charlotte Hornets. Former NBA player Pete Mickeal will take in the game on behalf of the Timberwolves organization.

Hmm, neither Heat nor Hornets play Timberwolves any time soon. But Minnesota is scheduled to have a scout here tonight in Charlotte, former NBA player Pete Mickeal.#FreeJimmyButler

Since Minnesota doesn’t need to prepare for either team playing tonight, the move will be met with wide speculation. Of course, the natural conclusion would be the Timberwolves still hold interest in a trade, but not until they get a good look at what they could be receiving in return.

Though unlikely, the move could be unrelated and made for other reasons. If the scout’s presence in Charlotte tonight is related to trade talks, then perhaps both organizations are close to a deal.

The Heat have some young players to trade away like Josh Richardson and Bam Adebayo, but as already reported, are not interested in doing so. The rest of this story could come down to a power struggle between Thibodeau and the former Marquette University standout.

The elephant in the room is the relationship between Butler and Thibodeau. The Houston, Texas native played for Thibodeau at his last stop, Chicago, before rejoining his former coach in Minnesota. As the two wear thin on each other’s patience, one of them will have to flinch.
[xyz-ihs snippet=”HN-300×250-TextnImage”]