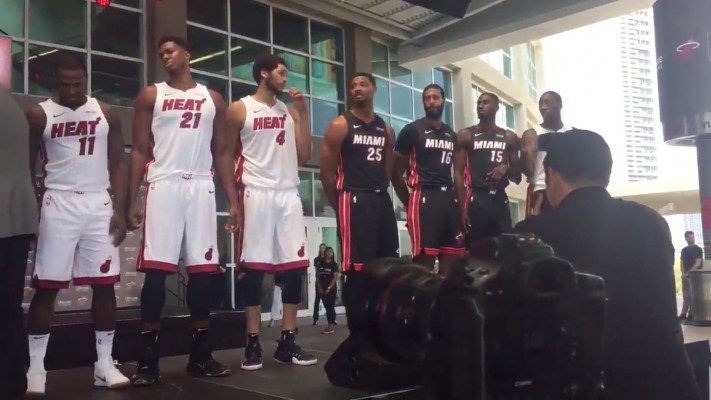 One big change that NBA fans will notice this season is the new rule that allows companies to buy advertisement patches on NBA jerseys. While many teams have already revealed their company sponsors, the Miami Heat‘s sponsor had remained a mystery.

On Thursday, the Miami Herald‘s Barry Jackson reported that the South Florida-based company Ultimate Software had won the competition to put its logo on Heat jerseys this season.

“We are extremely proud to have Ultimate Software as the first partner on the Miami Heat Jersey,” Vidalin said. “This is truly a historic opportunity and we are thrilled that we will be partnering with a company based here in South Florida.”

Vidalin continued to explain why Ultimate Software will make a fantastic partner for the Heat.

“This opportunity is not something we took lightly,” Vidalin said, adding that the Heat and Ultimate Software will work together on several community programs. “It was important for us to find a partner that had similar beliefs and values and Ultimate Software definitely fits that bill. They have been a longstanding partner of the Heat’s, with a rich history of giving back to the South Florida community.”

The Heat officially announced the partnership during a news conference at American Airlines Arena. According to Miami Herald beat writer Manny Navarro, the new partners also announced that they are teaming up to donate $1 million to relief efforts for Hurricane Irma.

It appears the Heat were committed to partnering with a company that calls South Florida home. While it may take some time for fans to get used to the new addition of jersey patches, Heat fans should be happy to know that many at Ultimate Software were likely rooting for the Heat long before the two became official partners.
[xyz-ihs snippet=”Responsive-ImagenText”]