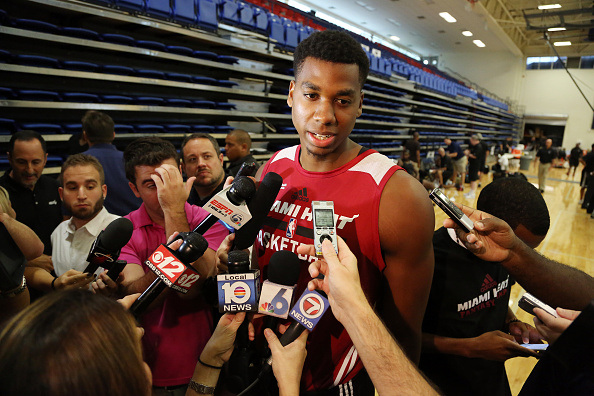 The frustration continues for Miami Heat center Hassan Whiteside, who remains off the court after having strained his right calf muscle last week during a workout, and is doubtful to see any action in Sunday’s preseason opener.

The Sun Sentinel’s Ira Winderman reported on Friday morning that Whiteside’s issue has prevented him from practicing for the fifth straight day. Miami head coach Erik Spoelstra is dealing with the situation as best he can, saying:

“He was able to do a little more on the sideline, but he didn’t practice. We do what we can, a lot of meetings. He’s at every practice. We have him engaged and involved, even though he’s not on the court practicing. He was with us last year, so he has an idea of a lot of the things that we do. So we control what we can control.”

Whiteside’s injury is just one of many currently affecting the Heat, though given his importance to the starting lineup, makes it the most important of those injuries. Joining him in the sick bay is guard John Lucas III, who’s being held out for rest, and forward Greg Whittington, who has been suffering from dehydration.

Hassan Whiteside (calf) out for the fifth day in as many days of camp. John Lucas III (rest), Greg Whittington (dehydration) also out.

Sunday night’s first look at the 2015-16 edition of the Heat will be against the Charlotte Hornets, with tip-off set for just after 6 p.m. at American Airlines Arena.
[xyz-ihs snippet=”Responsive-Ad”]