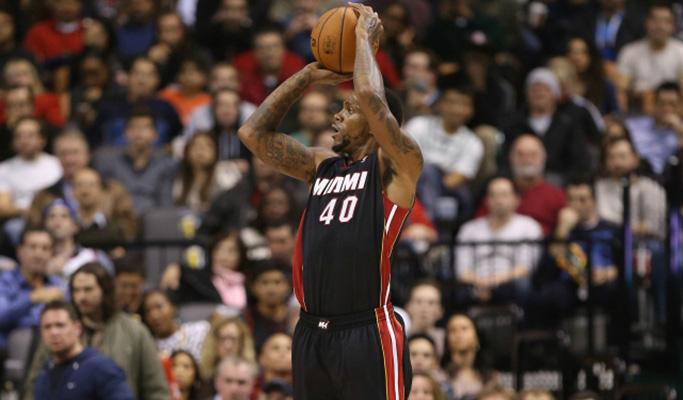 However, that doesn’t mean he hasn’t been trying to develop his stroke from beyond the arc. According to Barry Jackson of The Miami Herald, the Miami Heat forward has continued to work on his three-point game this offseason. Jackson states that coach Erik Spoelstra told Haslem that he needs to develop a shot from beyond the arc if he wants to receive more playing time:

“Haslem continues to work on his three-point game, having gotten the message from Spoelstra last October that he needs to hit from beyond the arc to get minutes at power forward. Haslem enters the season potentially sixth in the power rotation hierarchy, unless Chris Andersen is dealt.”

Over the past two seasons, Haslem has become a sparsely-used bit player for the Heat. When called upon, he has performed. However, he played just 16 minutes per game last season. Had it not been for the countless injuries to Miami’s frontline, he would have seen even less action.

The Heat enter the 2015-16 season with a lot of depth at center and power forward. Hassan Whiteside and Chris Bosh are projected as the starters, with Josh McRoberts and Amar’e Stoudemire the primary bigs off the bench. The wild card is Chris Andersen, as mentioned in the article by Jackson. If “Birdman” stays, he probably will be the team’s fifth big, meaning Haslem likely won’t even be guaranteed minutes on a game-to-game basis.

However, if the Heat either trade Andersen, or Haslem develops another niche in his game such as three-point shooting, UD could find himself as a member of the rotation on a nightly basis.

In 777 career games played, the veteran power forward has taken just 23 three-point attempts. If he is able to develop a stroke from beyond the arc, Spoelstra would have to find playing time for the three-time NBA champion in his lineup.
[xyz-ihs snippet=”Responsive-Ad”]