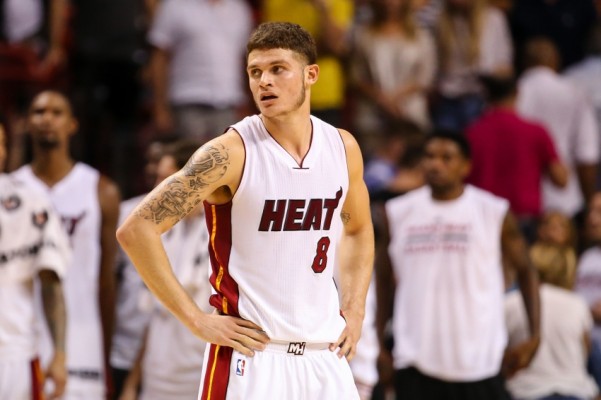 Tyler Johnson may not be out for the season after all.

The Miami Heat guard stated on Friday afternoon that he hopes to return before the end of the regular season, via Jason Lieser of The Palm Beach Post:

“In my head, yeah, for sure. My goal has always been to get back and have at least a couple games before the playoffs. That’s my goal. I think the doctors are just being cautious, but the process has been going really well.”

While Johnson remains optimistic that he can return this season, head coach Erik Spoelstra continues to stress that there is no timetable for his guard’s return:

“There’s no timetable. I reminded him of that two days ago. No timetable.”

The Heat have 14 games left in the regular season, with the final one taking place on April 13th in Boston.

Johnson has not done serious work involving his left shoulder, but he continues to work out without pushing himself too hard. He said he has begun shooting left-handed within limited range:

“I’m back to lifting, full conditioning, pretty much doing everything but taking long shots. I can do all the dummy offense and make pretty much every pass except fully winding up with the left. I can shoot in the paint. I’m getting back to finishing over the head, just layups and in close, nothing too long.”

The young guard stresses that he’s not “overdoing” it:

“I’m not overdoing it. If they’re giving me an exercise to do, any time I feel discomfort I shut it down instead of trying to push through it, which has been my way of doing it in the past. That’s probably why I had the surgery so late in the season. I’m definitely taking this one a little bit more maturely, I would say.”

Prior to his shoulder surgery, Johnson had played a significant role in the rotation, averaging 8.7 points in 24 minutes per game while converting on 48.8 percent of his shots.

If the Heat were to get Johnson back in time for the playoffs, it would make a huge difference, considering the team is short-handed as it is due to Chris Bosh’s absence.
[xyz-ihs snippet=”Responsive-Ad”]