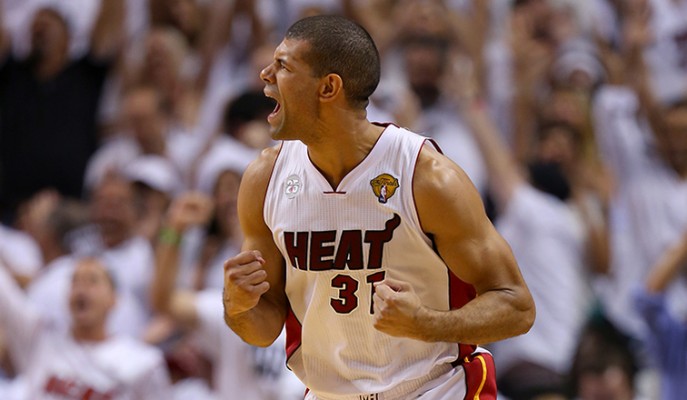 A few short years ago, Shane Battier was winning NBA championships as a forward for the Miami Heat. Now he’s back with the team, not as a player, but instead as a member of the organization’s front office. As of Thursday, the Heat announced that Battier will be rejoining the team as the Director of Basketball Development and Analytics.

“We believe Shane is an incredible example of our Heat program, not only for the present, but also for the future,” said Heat president Pat Riley. “He embodies everything that we are looking for in our players and staff. We feel he will help us tremendously with his experience and knowledge of the game. Shane is an out-of-the-box thinker and will bring a fresh expertise that can help us evolve as a franchise.”

Battier has always possessed a sharp basketball mind and now he will have the chance to put his knowledge of the game to use as an NBA executive for the first time in his life.

“I am thrilled to be joining the front office of the Miami Heat,” said Battier. “I look forward to working with the Arison family, learning from a Hall of Fame executive in Pat Riley, General Manager Andy Elisburg and of course my old coach, Erik Spoelstra. My goal, as is the entire organization’s, is to bring another championship back to Miami.”

Battier enjoyed a long and fruitful playing career in the NBA as a member of the Houston Rockets and Memphis Grizzlies before joining the Heat’s “Big Three” led teams from 2012 to 2014. He was a key component to those championship-winning teams as a lockdown defender and three-point specialist. He retired from the game at the end of the 2013-14 season.

The former stretch forward’s responsibilities with the team will include the evaluation of talent at the college and pro levels, as well as the evaluation of free agents and current Heat players. The role should suit Battier perfectly as he was always known to be a heady, cerebral player with a high basketball IQ. He also played in nearly 1000 (977 to be exact) games over his 13-year NBA career and knows a thing or two about on-court talent.
[xyz-ihs snippet=”Responsive-ImagenText”]