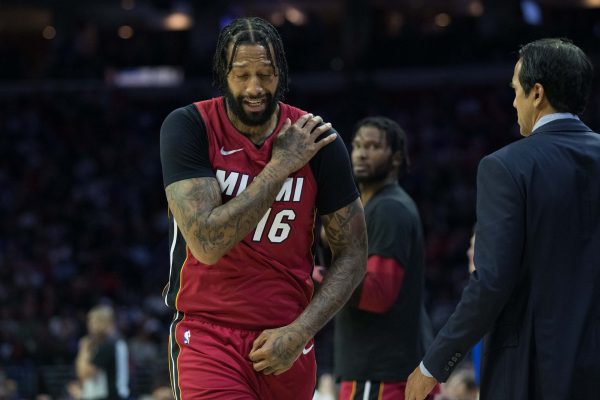 Miami Heat forward James Johnson left Thursday night’s loss to the Philadelphia 76ers with a shoulder injury. On Friday, an MRI revealed that the veteran power forward suffered a sprain in his AC joint.

Per Heat: James Johnson’s MTI revealed a slight Left AC Sprain. He will be listed as doubtful for tomorrow’s game.

After serving as an above average rotational player in his first two seasons with the Heat, Johnson’s play has taken a step back this season. He averaged 11.8 points, 4.9 rebounds, and 3.7 assists over the 2016-17 season and 2017-18 season.

This injury is unlikely to help with his falling numbers.

The Heat will look to overcome Johnson’s potential absence in Saturday’s game versus the Detroit Pistons. At the moment, the Pistons are just a half game ahead of the Heat in the playoff race.
[xyz-ihs snippet=”HN-300×250-TextnImage”]