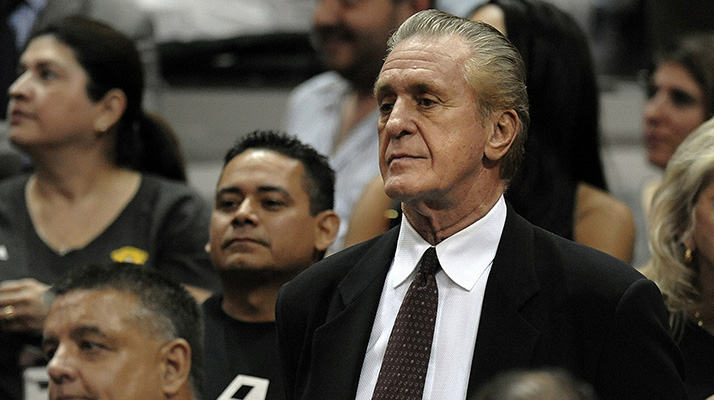 Although the draft picks of the Miami Heat during the Pat Riley era have often resembled poker chips, the former three-time NBA championship coach with a disdain for drafting international players, is in Spain this weekend to scout a pair of highly-regarded European prospects.

Riley took the surprising scouting trip along with Assistant General Manager Adam Simon and Vice President of Player Personnel Chet Kammerer, even though the Heat will not learn until the May 19 draft lottery if they will get to keep their top-10 protected pick. Miami will lose the selection to the Philadelphia 76ers if it falls out of the top 10.

Unlike past years, when Riley consistently traded first-round picks for proven talent, Miami appears set to add a lottery pick to its roster next season. The fact that the Heat are even considering an international prospect is also a surprise.

“I like the homegrown product, I just do,” explained Riley in 2010. “I feel comfortable with it. And maybe somewhere in free agency or via some trades, we may have missed somewhere along the line, but I just felt I just like the players here. That’s where I’ve gone. I’m not saying that we’re not going to ever draft a foreign player or sign one, but it hasn’t been at the top of our priority list.”

Because of the continued rise of the one and done NCAA freshmen entering the NBA unprepared, Riley’s self-confessed preference for U.S. collegiate players seems to be shifting. With too many collegians opting to leave school early, international prospects playing in Europe’s top leagues are now better prepared for the NBA than their American counterparts.

Riley did make a foray into the international market in 1996 when the Heat acquired Estonian forward Martin Muursepp. However, after giving up a future first-rounder and playing an exhibition game in Israel, Muursepp played less than 30 minutes with Miami before getting shipped to the Dallas Mavericks the following year.

Whether or not Miami will keep its pick remains unknown. But it is already evident that Riley’s preference for homegrown prospects has changed.
[xyz-ihs snippet=”Responsive-Ad”]