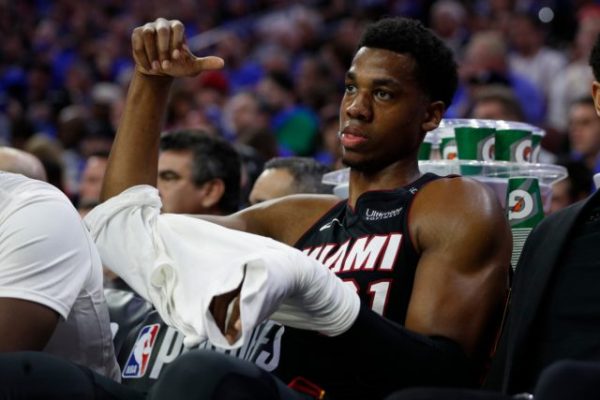 Miami Heat center Hassan Whiteside received some good news on Tuesday as his MRI came back negative. His status has been moved to questionable for Wednesday’s game against the San Antonio Spurs.

MRI on Hassan Whiteside knee came back negative. He is listed as questionable for Wednesday.

Whiteside injured his right knee during the second half of the Atlanta Hawks game on Saturday and did not return. He stated that the injury itself didn’t seem that serious to him, and that he would be able return from it sooner than later.

He’s dealt with a string of injuries pertaining to his knees dating back to last year around the same time of the season.

If Whiteside is unavailable against the Spurs on Wednesday, Bam Adebayo could once more get the go-ahead at replacing him in the starting lineup following his near double-double against the Detroit Pistons Monday. Whiteside has dealt with a few nagging injuries since the beginning of the season as well, though they haven’t slowed his production when he’s been on the court.

He’s currently averaging 12.4 points and 14.6 rebounds through the first nine games this season, a statistical trend that could lead to the highest outings of his career in these departments. The Heat will need all the support they can get from their roster, as they look to defend at home against the Spurs.
[xyz-ihs snippet=”HN-300×250-TextnImage”]