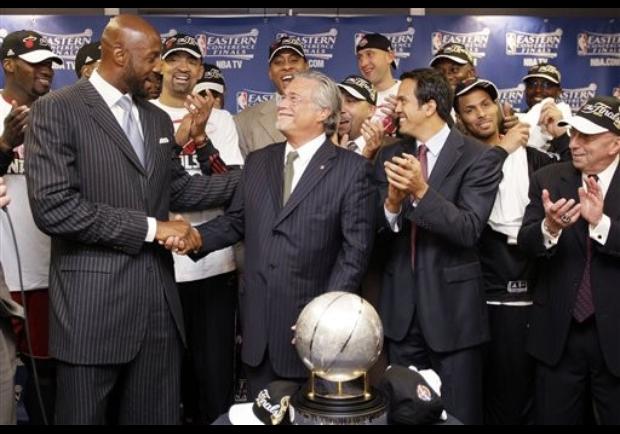 After former Miami Heat player LeBron James left the city of Miami, Heat owner Micky Arison had a different approach. Instead of addressing the departure of James, Arison let the city of Miami know one thing, “We are not done.” In this open letter to Heat Nation, Arison lets us know the record of excellence that he and the Heat have held since 1995 and how they are not going to be stopping anytime soon.

Here is the entirety of the letter, which can also be seen on Heat.com:

While what your Miami HEAT has accomplished in the last four years has been historic, there’s a bigger picture that more clearly defines the success we have enjoyed as a franchise.  Since I took control of the team in 1995 and brought Pat Riley in to run our Basketball Operations, the HEAT has made the Playoffs in 16 of those 19 full seasons, with five Eastern Conference titles and three NBA championships highlighting those Playoff appearances. The HEAT are one of only seven teams to have won a championship during that span and, of those seven teams, we are one of only four teams to win multiple championships. To get an even better idea of our record of excellence, consider that of the six NBA franchises established at or around the time the HEAT joined the NBA, only one other team has even appeared in the NBA Finals, with only the HEAT winning an NBA title.

From blockbuster trades for Alonzo Mourning, Tim Hardaway and Shaquille O’Neal, to drafting Dwyane Wade, all of whom are future Hall of Famers, to executing the most significant free agency acquisitions in league history when we acquired Chris Bosh, LeBron James and Dwyane Wade, your Miami HEAT have established themselves as an elite NBA franchise and have maintained a consistent level of on-court excellence, defining our legacy as a championship organization.  The fact that we have done all of this before celebrating our 30th Anniversary points out that we are the youngest NBA franchise to achieve this type of success and one of only 18 NBA franchises to win an NBA championship in the league’s 68-year history. And while those accomplishments speak for themselves, I’m here to tell you something else:  we are not done; not even close.

Pat Riley is fond of saying that the only thing you can count on in life is change and those that embrace change are best prepared to emerge successfully.  So while the names on the back of the jersey may change from time to time, the constant presence of the name “Miami” or “HEAT” on the front guarantees that our goal remains the same: to put a competitive team on the floor capable of competing for the ultimate prize. As a Miami HEAT fan, this is what you have come to expect from us. We are laser-focused on the present and the task at hand of defending our Eastern Conference championship with the East being described as “wide open,” while also positioning ourselves for maximum flexibility and maneuverability in the future.

Our returning core, led by three-time NBA champions Dwyane Wade and Udonis Haslem, two-time champion and nine-time NBA All-Star Chris Bosh, two-time champions Mario Chalmers and Norris Cole and NBA champion and fan-favorite Chris “Birdman” Andersen have once again shown their commitment to winning by doing what is necessary for the benefit of the team.  In addition, we welcome NBA All-Stars Luol Deng and Danny Granger, versatile veteran big man Josh McRoberts, two-time NCAA champion Shabazz Napier and exciting young talents like James Ennis and Justin Hamilton, who are coming off of very impressive showings at both the Orlando and Las Vegas NBA Summer Leagues.  Our roster is comprised of players capable of versatility and who are out to prove something to the rest of the league.

Like Dwyane said when he announced his return to the HEAT, I am a #HEATLifer.  That’s how I want you to feel about your role as a Miami HEAT fan — that you are a #HEATLifer – “all in” with us for what is sure to be an exciting 2014-15 season and an incredibly bright future where we will look to add to our three NBA championships.