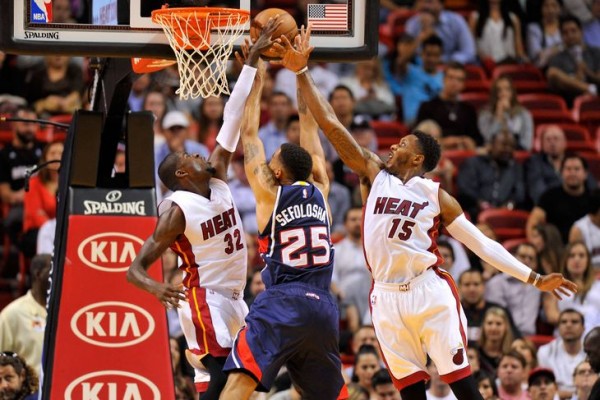 The long-rumored trade of veteran guard Mario Chalmers from the Miami Heat to the Memphis Grizzlies is now official, with Heat teammate James Ennis also being dealt in exchange for guard Beno Udrih, forward Jarnell Stokes and a second round draft pick.

That confirmation comes via a tweet from Yahoo Sports columnist Adrian Wojnarowski:

Udrih is a 33-year-old, 6’3″ guard who can play at either spot in the backcourt, averaging 8.7 points and 3.5 assists for his 12-year career. In eight games as a reserve for the Grizzlies this year, Udrih averaged 5.9 points and 3.3 assists in exactly 15 minutes per game.

Miami will be the seventh team that Udrih has played for, with his greatest success coming during four seasons with the Sacramento Kings from 2007-11. There, he averaged double figures in points and more than four assists per game.

Stokes, a 6’9″ power forward who will turn 22 in January, had played just two games in his second season with Memphis. He was originally a second-round selection of the Utah Jazz in the 2014 NBA Draft. He has yet to score in just four minutes of action this season after having averaged 3.0 points and 1.8 rebounds per game last year in 19 contests.

Chalmers had been on the trading block since this past summer because his contract threatened to push the Heat over the luxury tax threshold. He was originally a second-round selection of the Minnesota Timberwolves in 2008, but was dealt to the Heat in a draft night move. He averaged 8.8 points and 3.8 assists during his time with the Heat.

Ennis, who played both forward slots, was in his second year with Miami. He did not score in seven minutes of action over three games this season, but last year, averaged exactly five points per game and 2.8 rebounds.
[xyz-ihs snippet=”Responsive-Ad”]