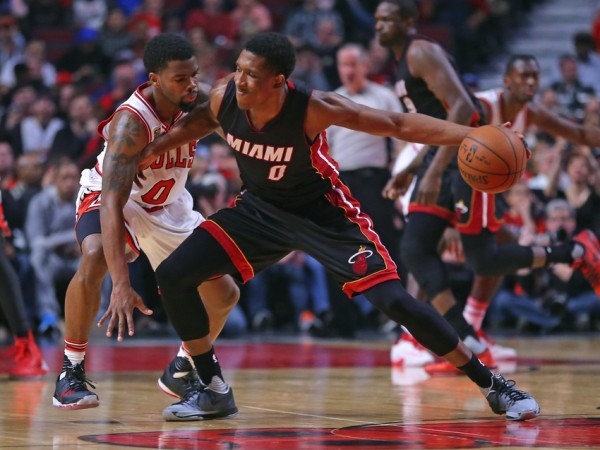 In 21 games thus far for the Miami Heat this season, shooting guard Josh Richardson is averaging just 10.1 points on an abysmal 37.3 percent from the field and 30.8 percent from 3-point range.

The percentages are a considerable drop-off from last season, when the guard shot 45.2 percent from the field and 46.1 percent from three. However, Manny Navarro of the Miami Herald is now reporting that there may be a viable reason for why the shooting guard is struggling thus far in the Heat’s season.

According to Navarro, Richardson is playing with a sore right wrist and says he feels a sharp pain every time he shoots the ball.

“It’s tough to follow through,” Richardson said. “I’m kind of short-arming it.”

Even so, Richardson is reportedly going to soldier through the discomfort to try and help a banged-up Heat team desperately try to turn its season around.

“We all want to see him continue to get a better rhythm, better flow and understand, which he does, how many different ways he can impact a game. Sometimes you get a possession momentum changing block or one on one defensive stop. A lot times that can get you in rhythm in other areas in a game,” Heat head coach Erik Spoelstra said. “I don’t want him just to be thinking how he can impact the game with his shooting or whatever people think they want him to be right now. He’s multi-dimensional player, two-way player. When he’s at his best, he’s making momentum-changing defensive plays and he’ll get back to that.

The shooting guard has been wearing tape and sometimes a brace on his wrist to support his shooting during games.

“I never got hurt before [this season],” Richardson said. “I feel like once one thing in my body got hurt, everything else has. It’s been that kind of vibe.”

Richardson and the Heat will get a chance to see if the extended break over the weekend has given them a sufficient amount of time to regroup and recover as they take on the Oklahoma City Thunder on Tuesday night as AmericanAirlines Arena.
[xyz-ihs snippet=”Responsive-ImagenText”]