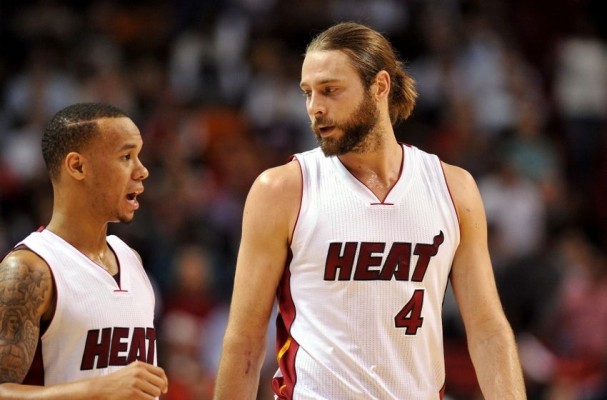 Both Josh McRoberts and Shabazz Napier suffered season-ending injuries before they could even complete their first full seasons with the Miami Heat.

Now they’re each back on the road to recovery. Both McRoberts and Napier have resumed working out, albeit in different locations.

McRoberts has engaged in limited workouts in his native state of Indiana under a program designed by the Heat, with the team’s training staff assisting in his comeback. Napier has worked out with the team’s other players under contract for next season at American Airlines Arena.

The 28-year-old power forward underwent knee surgery in December, cutting short his first season in Miami. Expected to be the team’s starting power forward entering the year, McRoberts caught the injury bug in training camp when he suffered a strained back and a serious toe injury. He finished the 2014-15 season appearing in just 17 contests, averaging 4.2 points and 2.6 rebounds per game.

Napier was not ruled out for the year until the beginning of April, when the Heat announced he underwent surgery for a sports hernia. He had averaged 5.1 points, 2.5 assists and 2.2 rebounds in 51 appearances including 10 starts in his rookie campaign.

The rookie commented on his path to recovery, via Ira Winderman of The Sun Sentinel:

“We haven’t done a lot of competitive one-on-one stuff for me. But it’s just dealing with the mental part. I had surgery on my foot when I was in college, and the biggest thing was the mental part. I didn’t want to play because I was scared I would get injured. It’s just facing that right now and going through that.”

Others who are participating in offseason workouts at the Heat’s home arena include Chris Bosh, Hassan Whiteside, Mario Chalmers and Michael Beasley.

If the Heat hope to rebound from last season’s 37-45 record, they will need McRoberts and Napier as healthy contributors off of the bench for the 2015-16 season.
[xyz-ihs snippet=”Responsive-Ad”]