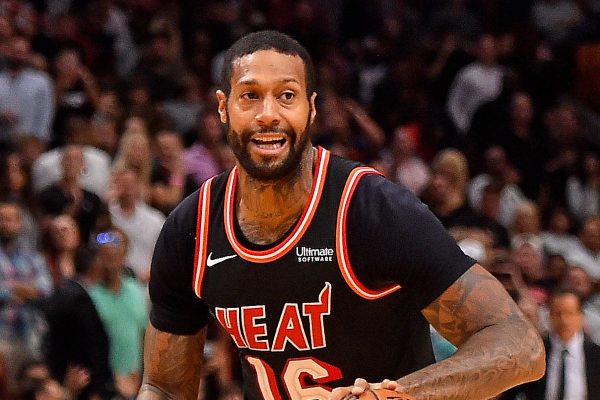 Miami Heat forward James Johnson is listed as probable for the Heat’s Sunday night home game against the Los Angeles Lakers, according to Ira Winderman of the Sun Sentinel. Johnson missed the first 15 games of the 2018-19 season while recovering from offseason sports hernia surgery.

Johnson’s injury was one that plagued him during the second half of last season. Due to his struggles in trying to play with the problem, he underwent surgery in May. The rehabilitation period was expected to have him ready for the start of the season, but delays pushed that back a full month.

Having Johnson back in the lineup will be a welcome sight for the injury-plagued Heat, with Goran Dragic and Rodney McGruder’s statuses for the contest against the Lakers listed as questionable. Dragic has been battling knee trouble, while McGruder’s issue is listed as a left quadriceps contusion.

Another member of the Heat who has yet to take the court is guard Dion Waiters, with no indication exactly when he’ll be cleared to play.

In addition to those players, the Heat will also be without Dwyane Wade, who remains on paternity leave following the Nov. 7 birth of his daughter. Wade will miss the opportunity to reconnect with close friend and former Heat teammate LeBron James, who joined the Lakers as a free agent during the offseason.
[xyz-ihs snippet=”HN-300×250-TextnImage”]