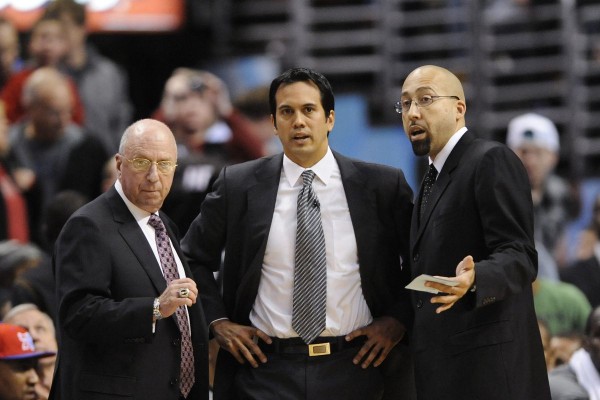 After having coached 26 years in the NBA, including 22 as an assistant, former Miami Heat head coach and assistant Ron Rothstein was recognized on Tuesday by the National Basketball Coaches Association (NBCA) as its 2017 recipient of the Tex Winter Assistant Coach Lifetime Impact Award. The accolade was the second time that it’s been awarded, with Phil Johnson having won the inaugural award.

“This is not only an honor, it is also a truly humbling experience,” Rothstein said. “Over the course of my 22 years as an assistant, I have been fortunate enough to work for seven outstanding head coaches.

“It all started in 1979 when Mike Fratello recommended me to Hubie Brown, then head coach of the Atlanta Hawks. Hubie hired me as a part-time regional NBA scout while I was still a high school teacher and coach. My first full-time assistant coaching job was with Mike Fratello and the Atlanta Hawks. Following that, I joined Chuck Daly and the Detroit Pistons. Next, I rejoined Mike Fratello with the Cleveland Cavaliers, followed by Rick Carlisle and the Indiana Pacers, and then finished the last 10 years of my coaching career with the Miami Heat, working for Stan Van Gundy, Pat Riley and Erik Spoelstra.

“Not many coaches get as lucky as I did to work with and for so many brilliant and successful head coaches. I can’t thank them enough for all that they have done for my family and me over the course of my career.”

The 74-year-old Rothstein was named the Heat’s first-ever coach in 1988 and had the misfortune of coaching the expansion franchise for its first three seasons. After compiling a record of 57-189, he moved on to to serve as the head coach of the Detroit Pistons for one season in 1992-93. He led the Pistons to a 40-42 mark, missing the postseason by a single game.

Both before and after those roles, Rothstein served as a long-time assistant for three other teams. He returned to the Heat in 2004 and spent 10 seasons in the role of an assistant. That timing allowed him to be a part of all three of the franchise’s NBA titles.

Carlisle, the NBCA President and head coach of the Dallas Mavericks offered evidence of exactly why Rothstein won the award:

“Ron Rothstein is most deserving of this prestigious recognition,” Carlisle said. “Over several decades, Ronnie has helped countless players and coaches become their very best while continually helping promote the NBA game. I had the privilege to work with Coach Rothstein during the 2003-04 season. As an assistant for me in Indiana that year, Ron was a high impact contributor to our Pacers team that set a franchise record with 61 wins. More recently, Ronnie was top assistant to Erik Spoelstra during Miami’s run of back to back Championships in 2012 and 2013.”

Prior to entering the NBA in 1983, Rothstein had served as a high school basketball coach for 16 seasons, spending the 1974-75 campaign as an assistant at Upsala College. During the three seasons the WNBA’s Miami Sol were in existence from 2000-02, Rothstein served as their head coach and led them to a 48-48 record, including a playoff berth in 2001.
[xyz-ihs snippet=”HN-Native-EndofArticle”]