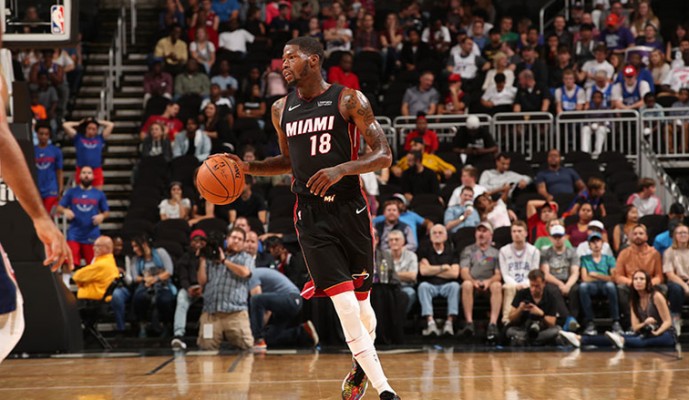 Just one day after the Miami Heat‘s final preseason game, the team has decided to waive three players in an effort to reduce the roster limit to 15 players.

The Heat announced Saturday afternoon that DeAndre Liggins, Erik McCree and Tony Mitchell have all been waived.

Liggins, who signed with the Heat four days ago, played in the team’s preseason finale against the Philadelphia 76ers. In about 26 minutes, the shooting guard put up five points, three rebounds and a steal. Liggins has also played with the Orlando Magic, Oklahoma City Thunder, Cleveland Cavaliers and Dallas Mavericks over the course of his four seasons in the NBA

McCree played in just two preseason games with the Heat, computing a mere six points, three rebounds, one assist and one steal while shooting 3-of-8 from the field. Miami added the undrafted Louisiana Tech University small forward on Sept. 18.

Mitchell, who played in no preseason games with the Heat, actually has a loaded resume in the NBA G League. In 78 NBA G league appearances (52 starts), the 6-foot-8 wing averaged 21.2 points, 5.9 rebounds, 2.8 assists, 1.2 steals and 32.7 minutes while shooting 42.5 percent from the field. In addition, Mitchell earned G League Rookie of the Year honors in 2013 while being named to the All-G League First Team and All-G League Rookie Team.

The Heat’s roster now stands at 17 players, but the Heat could make some interesting moves in the next few hours.
[xyz-ihs snippet=”Responsive-ImagenText”]