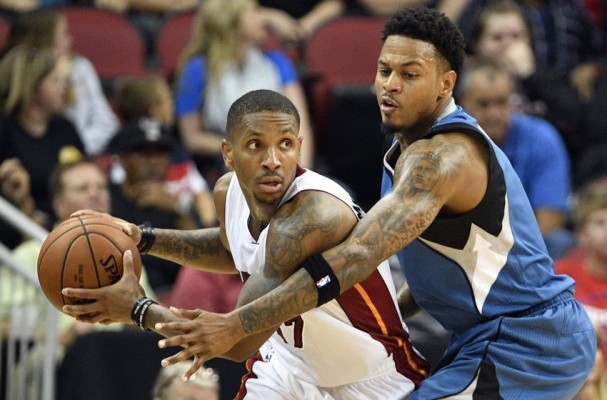 In a series of important roster changes, the Miami Heat are reportedly holding onto preseason standout Rodney McGruder and cutting guards Beno Udrih and Briante Weber.

McGruder, 25, went undrafted out of Kansas State University in 2013 but turned eyes with the Heat’s D-League affiliate Sioux Falls Skyforce. In his time with the Skyforce last season, the 6-foot-5 guard put up 15.8 points a game in the regular season and 22.7 points in the postseason.

By impressively helping the Skyforce win their first championship, McGruder found himself on the Heat’s preseason team. The shooting guard didn’t disappoint, averaging 7.4 points and 2.1 rebounds, while shooting 41.1 percent from the field and 36.6 percent from three.

The performances McGruder put on in the eight-game preseason have ultimately secured him a roster spot, edging out Udrih and Weber, who both played reserve roles on the Heat last season.

Unless Udrih is claimed by another team, the Heat will soak up a $980,000 cap hit, giving the veteran a guaranteed $1.6 million in salary. The 34-year-old gave up $90,000 in salary last season, allowing the Heat to sign a few key players for the playoffs.

As for Weber, if he is unclaimed by another team, the Heat will likely be thrilled to have him return to their D-League affiliate. The 23-year-old guard still has work to do, as seen from his 20 turnovers and 27 percent shooting in the preseason, but could be an asset down the road.

The Heat have their 15-man roster and will start the season on Wednesday against the Orlando Magic.
[xyz-ihs snippet=”Responsive-ImagenText”]