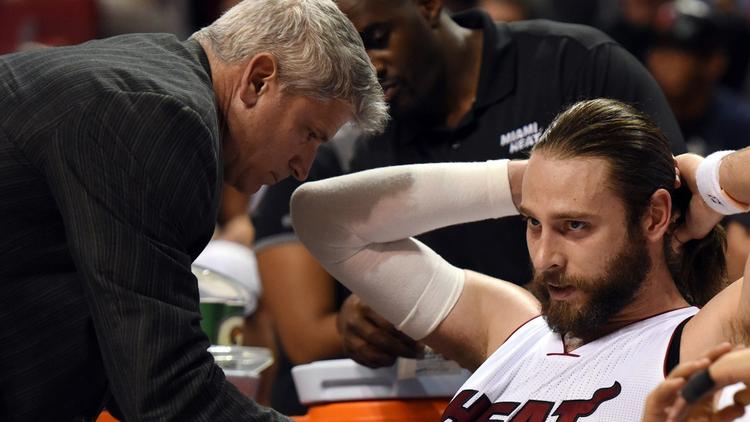 The Miami Heat will seek a $2.65 million salary cap exception due to Josh McRoberts being out for possibly the rest of the season.

Ira Winderman of The Sun Sentinel announced early Tuesday that the Heat will be applying to the NBA for a disabled-player exception to replace the veteran power forward. Such an appeal will be largely dictated by whether an independent NBA physician declares McRoberts’ knee injury to be season-ending.

If it is ruled that McRoberts’ injury is season-ending, the Heat would be granted a $2.65 million exception that can be used either through trade or by signing a free agent. For such player exceptions, Miami would be limited to acquiring a player through trade who is in the final year of their contracts, or by signing a free agent to a one-year deal.

The Heat would have to use the player exception by March 10 for it to be valid.

The 6’10” forward has struggled with injuries since training camp in October. The 27-year-old had been recovering from a toe injury at the beginning of training camp when he re-aggravated said injury, along with injuring his back at the beginning of October. The injuries caused McRoberts to miss the entire preseason before making his season debut on November 1 versus the Philadelphia 76ers.

Coach Erik Spoelstra stated that it is unlikely the power forward will return this season:

“Likely will be out for the season. We’ll find out more when he has the surgery on Monday or Tuesday. But we’re proceeding as if he won’t be here.”

Spoelstra followed up by remarking that it was a surprise the injury was this serious:

“It was a surprise because the doctor in Phoenix checked him out, Heat trainer Jay Sabol looked at him, really thought it was a bone bruise. But after three days, the symptoms didn’t get any better and that’s when Jay said, ‘OK, this may be something a little bit more serious.’ And so we had it checked out.”

Although the Heat may be granted a player exception because of McRoberts’ injury, he will still be counted toward the maximum limit of 15 players on the roster. If Miami is to acquire a player with this exception, they would have to release a current player on the roster.

Spoelstra is not concerned with that at the moment:

“That’s not where my mindset is at at all right now. That’s not my job.”