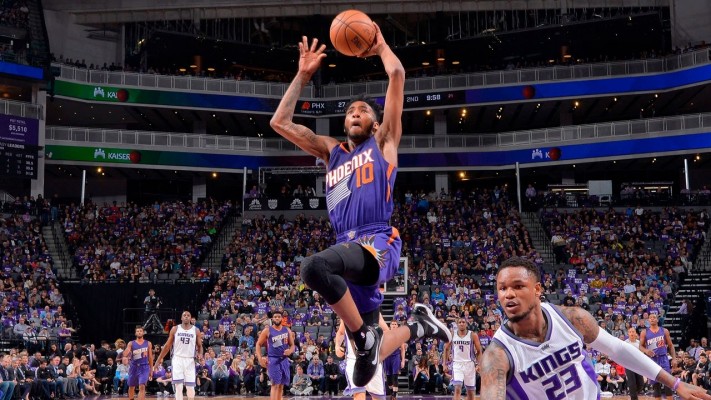 With 2017 coming to a close, the Miami Heat have begun looking toward the 2018 portion of their schedule with the signing of forward Derrick Jones Jr. to a two-way contract on Sunday. Adding Jones to the team’s roster subsequently resulted in the waiving of undrafted rookie guard Matt Williams Jr.

In a later follow-up article, Winderman noted the signing of Jones had taken place. Undrafted out of UNLV in 2016, Jones had been playing for the G League team of the Phoenix Suns after having been waived by the parent club on Dec. 7.

“Jones signed his contract at the Heat’s American Airlines Arena offices, to begin his stint with the team in the NBA, thereby beginning the clock on his allowable NBA days,” Winderman wrote. “He will wear No. 5.”

The two-way contract allows a team to hold a roster spot for a player on the team’s NBA roster for up to 45 days. Once that limit is reached, the player has to sign a regular NBA contract with the team or return to the team’s G League affiliate, in this case, the Sioux Falls Skyforce, for the remainder of the year.

During the past two seasons, Jones played in 38 games for the Suns. Seeing 15.2 minutes of action per game, he averaged 4.7 points and 2.2 rebounds.

In his G League career, Jones has played in 35 games, averaging 14.9 points and 6.3 rebounds per game. This season, he’s played in 19 contests and averaged 14.5 points and 5.9 rebounds, with his 49.5 percent shooting from the field slightly better than his 49.0 percent G League career number in that category.

Williams was elevated to the Heat’s roster following the recent injury siege. Though known for his long-range shooting, Williams only saw 11 minutes of action in three games, shooting 33 percent for the field on 2-of-6.

By the middle of January, the Heat will also have to make a decision on another two-way player, Derrick Walton Jr., with his 45-day time limit coming in slightly more than two weeks.