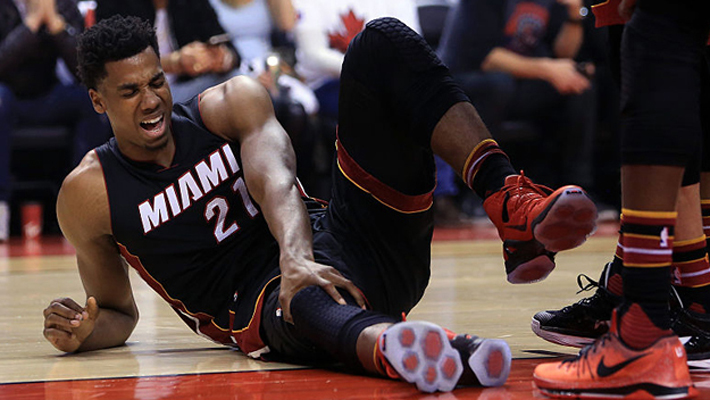 After the Miami Heat fell to the Toronto Raptors in Game 3 by a score of 95-91, the thought immediately shifted to the status of center Hassan Whiteside.

The 7-foot center suffered a knee injury early in the second quarter of Saturday’s game and never returned. It is unknown just how severe the injury is as he’ll undergo an MRI on Sunday, but the team is calling it a right knee sprain for now.

While the extent of the injury remains to be seen, Whiteside did say his knee went “two different ways” when he landed awkwardly on an offensive rebound.

Whiteside says while it's the same knee that was bothering him. But not related, "My knee went 2 different ways."

According to Ethan J. Skolnick of the Miami Herald, Whiteside walked slowly out of the locker room with a cast.

With the Heat trailing the series 2-1, they can’t afford for Whiteside to sit out even one game. While Udonis Haslem performed admirably in his absence, Miami won’t win this series if they’re relying on Amar’e Stoudemire and Haslem for major minutes at the center position.