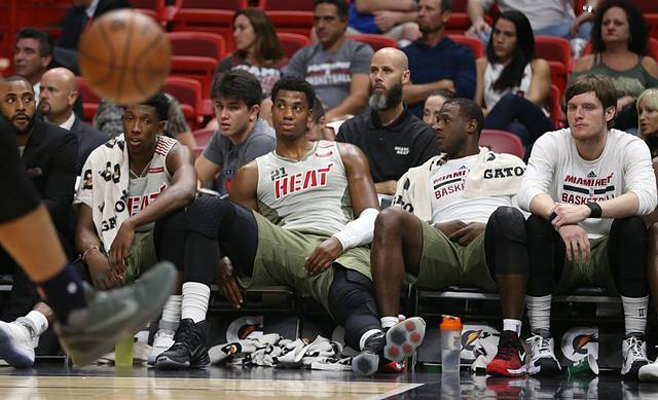 When the Miami Heat returned from its West Coast road trip Sunday, the general consensus was that the team’s injured players would be really close to returning, if not already back.

Unfortunately, that won’t be case; instead, the exact opposite. According to Barry Jackson of the Miami Herald, the Heat will be without five players for tonight’s contest against the New York Knicks and the team’s upcoming three-game road trip later this week.

The Heat has faced injuries all season long. However, this appears to be a new low. Without Dion Waiters (groin) and Justise Winslow (wrist), the team is missing 40 percent of its desired starting lineup. In addition, James Johnson (shoulder), Luke Babbitt (hip) and Josh Richardson (ankle) will all be out of action as well.

Winslow has already missed 11 games while Waiters will miss his fifth tonight. Johnson and Babbitt, who couldn’t finish the trip in Portland, will be missing their first games at American Airlines Arena. Richardson, who missed the start of the season with a partial MCL tear, will be absent for a fourth consecutive game with his new ankle injury.

Yet, the Heat won’t have any excuses.

Heat head coach Erik Spoelstra commented on the possibility of being extremely shorthanded Tuesday after practice, per Barry Jackson of the Miami Herald:

“That’s the NBA,” the Heat’s coach said after rattling off updates on the five players who are listed on the team’s injury report. “We’ll have enough healthy bodies.”

Enough healthy bodies means nine players the Heat will have for the next week or so. The next possible game all five players can return to the floor is Monday versus the Washington Wizards.