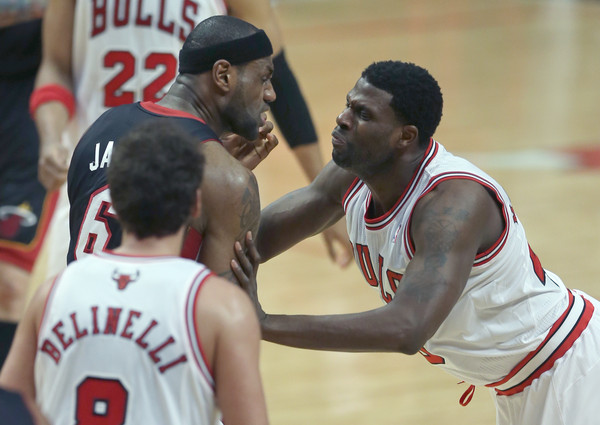 The Miami Heat continue to focus on building its front court with its latest workout last Thursday, as the team worked out veteran free-agent center Nazr Mohammed, according to CSN Chicago. Mohammed, a 16-year NBA veteran, played the last two seasons with the Chicago Bulls, averaging two points and 2.5 rebounds per game in the Windy City.

Mohammed started only 13 games and played just under nine minutes per game with the Bulls, but is well known amongst Heat fans for his shove of then-Heat forward LeBron James during Game Three of the Eastern Conference Semifinals of the 2013 playoffs (video below). After being thrown to the floor off of a hard foul by James, the 36-year-old center retaliated with a shove that earned his ejection from the game. With James now a rival of the Heat as he leads the Cleveland Cavaliers, Mohammed could find himself in another showdown with the multiple-time league Most Valuable Player when the squads meet on Christmas Day for the first time since James departed South Beach.

After the Bulls signed Pau Gasol and former first-round draft pick Nikola Mirotic to deals to bolster the frontcourt, Mohammed’s spot with the team became expendable. With Greg Oden no longer on the roster, the Heat could use a veteran presence in Mohammed to help solidify the center position. Averaging 16 minutes and 5.9 points per game with eight different teams over his career, Mohammed would certainly need to battle with fellow veteran big man Chris “Birdman” Andersen for critical minutes in the paint as the Heat remain a viable contender in the Eastern Conference.