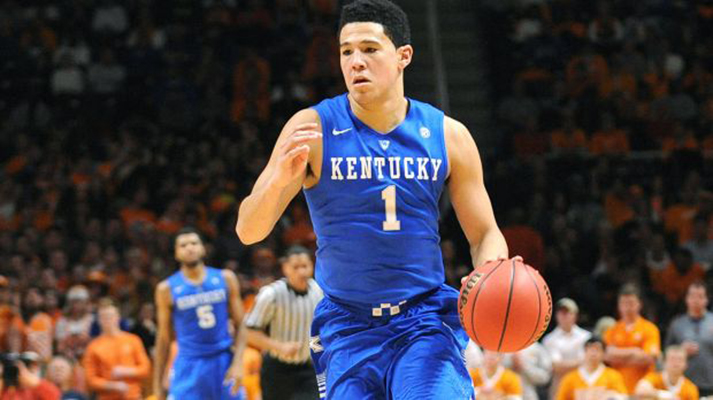 With the NBA Finals coming to a close, the Miami Heat are in full draft mode.

The NBA Draft is a little over a week away and the Heat hold the No. 10 selection in the 2015 NBA Draft. Miami would seem to be on the lookout for a swingman capable of knocking down the trey and playing solid defense, but Heat president Pat Riley stressed that he’s “on the lookout for the best player available,” per Joseph Goodman of The Miami Herald:

“Guys who can make threes, guys that are playmakers and guys that can defend. And, so, I’m not saying the perimeter is what needs to be filled. We’re going to take the best player that’s available unless there is someone there we like at a specific position.”

The Heat are currently looking at players of all positions, according to Ira Winderman of The Sun Sentinel:

Booker would seem to fit the three-point shooting swingman role that Riley discussed prior as he shot 41 percent from beyond the arc last season. However, he isn’t considered a strong defender.

Winderman believes Booker is the best shooter in this year’s draft:

Would have to believe, since Booker is best shooter among top tier. https://t.co/PCtoArUXrA

Kaminsky is no swingman but figures to be a stretch four in the NBA. He converted on 41.6 percent from three-point range as a senior. At seven-feet tall, he can play both center and power forward and possesses ball-handling skills of smaller players. Similar to Booker, defense is not considered his strong suit.

With Luol Deng likely to decline his player option to become a free agent this summer and the future of Dwyane Wade in a Heat uniform a huge question mark at the moment, Miami’s best bet may be to draft a swingman even if players like Kaminsky and Turner are still on the board.

The NBA Draft is set for June 25 at 7 PM EST and will be televised nationally on ESPN.
[xyz-ihs snippet=”Responsive-Ad”]