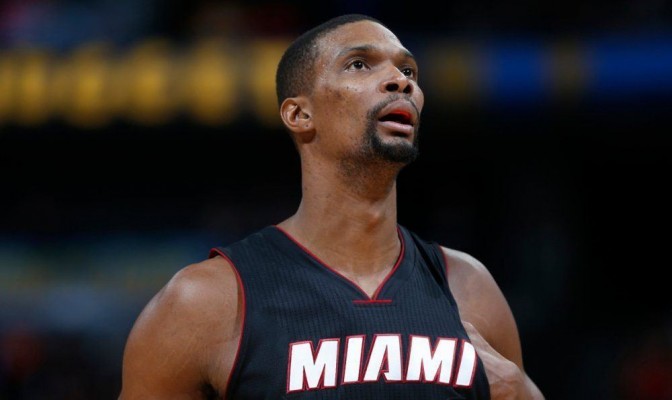 With the Miami Heat’s offseason having begun, a number of roster concerns need to be addressed, especially the uncertainty again surrounding the career of forward Chris Bosh, since it’s an issue that could force him into retirement.

Bosh has been plagued the last two seasons with precarious health issues that could be life-threatening if they aren’t addressed through medication. The problem for the Heat is that receiving such medication effectively prevents him from playing again.

That fear, according to Brian Windhorst of ESPN.com, is because team doctors would be extremely reluctant to ever clear him to play without the needed medication. This approach has been reinforced in meetings with outside medical personnel.

At the start of this month, the team attempted to give an update on Bosh’s situation. However, it offered no real indication that he would be able to return.

“The Heat, Chris, the doctors and medical team have been working together throughout this process and will continue to do so to return Chris to playing basketball as soon as possible,” was part of a statement from the team, medical staff and Bosh himself.

The frustration of the situation was personally expressed by Miami head coach Erik Spolestra, who was torn between wanting Bosh to play and allowing him to live out his life.

“I feel very badly for CB because I know how much this game means to him,” Spoelstra said Sunday. “I think everybody knows how much CB means to me.”

From an economic perspective, if the Heat wanted to remove Bosh’s salary from being part of the team’s salary cap, they’d have to wait until February 9. That’s the one-year anniversary of his last game with the Heat.

At that point, league rules indicate that an independent doctor agreed upon by the players’ union and Miami can offer their opinion on Bosh’s status. If the prognosis is negative, the Heat would be able to remove Bosh’s salary from the team’s salary cap next summer.

A large portion of the final three seasons of his contract would be covered by insurance. While that is part of a worst-case scenario, Miami would rather see Bosh back on the court.
[xyz-ihs snippet=”Responsive-Ad”]