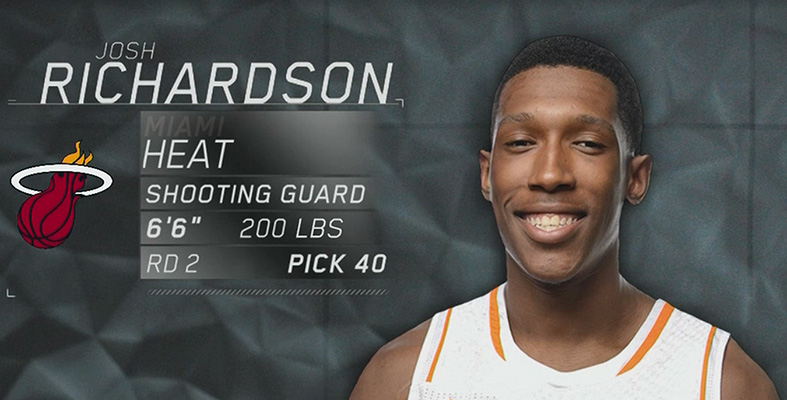 He may not be Dwyane Wade, but the Miami Heat addressed the shooting guard position with the selection of the University of Tennessee’s Josh Richardson with the No. 40 overall pick.

Richardson averaged 16.0 points, 4.5 boards and 3.6 assists on 46 percent shooting from the field in his senior season at Tennessee.

The 6’6,” 200-pound shooting guard was a first-team All-SEC and first-team SEC All-Defensive selection during the 2014-15 season.

Richardson’s strengths include his physical tools and athleticism. He also possesses an improving three-point shot as noted by Draft Express:

“Richardson has improved as a three-point shooter throughout his career, seeing his average rise nearly each season from 24.3% as a freshman on around one attempt per game, to 35.9% as a senior, on four attempts per contest. As a role player in the NBA, Richardson will need to be comfortable spotting up off the ball to space the floor and he showed in his senior season he could potentially fit into that niche, as he shot 39.4% on catch and shoot opportunities. While his release looks very smooth at times, his form tends to waver, especially when rushed, as he tends to jump forward excessively and contort his body sideways when closely guarded, looking very off-balance in the process.”

However, he’s not a great finisher at the rim and he doesn’t get to the free-throw line very often.

Best-case scenario for the Tennessee product is for him to have an impressive summer league showing which gives him a chance in the Heat’s D-League affiliate. Whether through injuries or poor play from the active roster, Richardson could get a chance to shine on the active roster at some point during the 2015-16 season.

Worst-case scenario is he washes out of the league without much of a peep like most second-round picks do.

Regardless, both Tyler Johnson and James Ennis both cracked the Heat’s rotation during the 2014-15 season despite being former undrafted free agents/second-round draft picks.  This gives a player like Richardson hope as Pat Riley sees some potential in the 21-year-old guard.
[xyz-ihs snippet=”Responsive-Ad”]