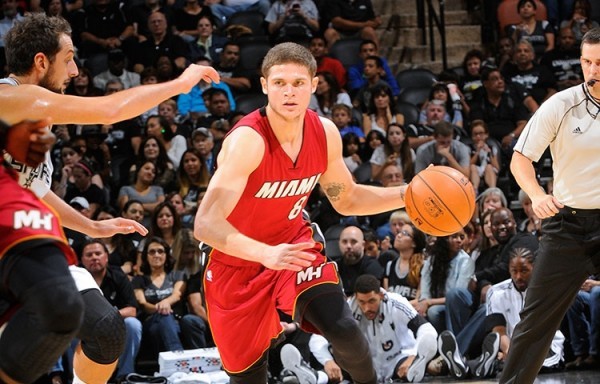 Early Thursday morning the Heat got closer to their final opening night roster — which must be trimmed to a maximum of 15 players — by releasing Tyler Johnson, Shawn Jones, and Larry Drew II. The release of Larry Drew II was expected as the Heat’s intentions were to sign and release him in order to assign him to their D-League affiliate team the Sioux Falls Skyforce.

On the other hand, forward Shawn Jones didn’t seem like he was particularly ready for the NBA level. In 16.5 minutes of play through four games, Jones only averaged 3.0 points and 3.0 rebounds and evidently did not impress the Heat organization. Jones is very nitty gritty, however, he will need to be developed further before he’s ready for a NBA team.

The most surprising cut out of the three has to be shooting guard Tyler Johnson. Although a bit out of control at times, Johnson’s athleticism and raw talent were clearly there as he would have been the perfect player to develop under the mentorship of Dwyane Wade and the rest of the veterans in the Heat locker room. Johnson only played one game for Miami, but scored 17 points on 46.2% shooting from the field to go along with four rebounds and two assists. It has been rumored that the Heat will likely extend Johnson an invitation to play on the Skyforce, as they did Larry Drew II.

With the Heat only needing to cut one more player from the team, the final spot will likely be a toss up between Andre Dawkins and Khem Birch. Dawkins has averaged 11.0 points through two games in the preseason, while Birch has been a breath of fresh air on the glass. Birch has played five preseason games, averaging 16.7 minutes and 5.4 rebounds, while impressing the Heat coaching staff with his blue-collar activity inside the paint.

The Heat will play the Memphis Grizzlies tomorrow night at 8:00 PM E/T to play out their final preseason game.
[xyz-ihs snippet=”Responsive-Ad”]