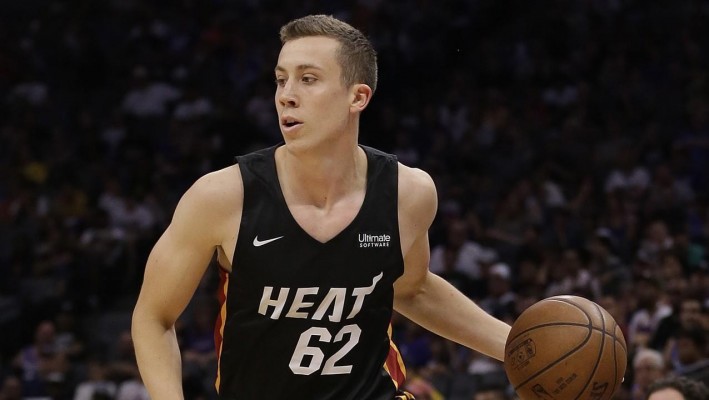 The Miami Heat didn’t have a pick in the 2018 NBA Draft, but that hasn’t stopped them from signing a talented rookie to their roster.

After turning heads with his performances during the NBA Summer League, Duncan Robinson and the Heat have agreed to a one-year two-way contract.

The Heat have quite a few reasons for signing the University of Michigan alum. Robinson has started all five of Miami’s Summer League games. In those games, he has averaged 12.4 points on 57.8 percent shooting and 62.9 percent shooting from beyond the arc.

“We kind of thought that he wouldn’t get drafted,” Kammerer said at the NBA Summer League, “and I kind of had in mind all along and felt like this is the key guy that goes undrafted and we could plug him in.”

He continued to discuss what Robinson specifically brings to the table.

“I just think he’s special as far as a shooter,” he said. “And we can expand his game. And he’s done some things that have encouraged us, things he didn’t do during his college career. His numbers were pretty weak, except for the fact that he could shoot. And he’s not 6-3.

“So the attractive part is his length, his size and then his ability to shoot. I saw him at a workout early and it was one of the more impressive workouts I’d ever seen, that’s why I felt he could be a special shooter.”

As for Robinson, he’s just grateful for the opportunity to prove that he can excel at the next level.

“I felt like I was labeled in college,” he said. “Not to discredit anything I did in college, but I feel there’s a lot more to my game than just that. It’s a great opportunity to be out here and be able to showcase that. I’m grateful for the opportunity.

“I’m just trying to show it on both ends and mix it up and maybe break some labels, stereotypes that have been placed on me.”

Thanks to his new contract, it looks like Robinson is going to get the opportunity to prove that and more to the Heat this upcoming season.
[xyz-ihs snippet=”HN-300×250-TextnImage”]