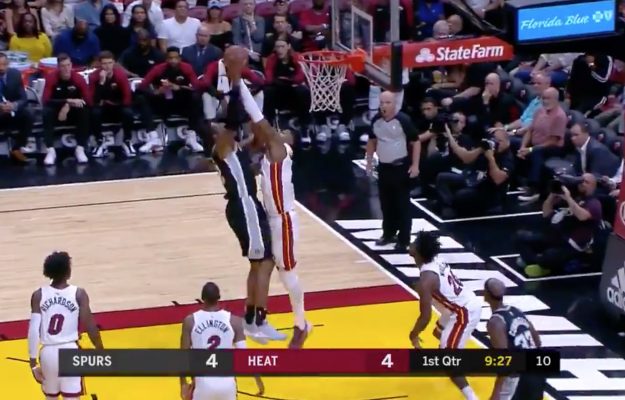 Miami Heat center Hassan Whiteside established a new team record during the first half of Wednesday’s game against the San Antonio Spurs by swatting away eight shots in the opening 24 minutes of action.

Hassan Whiteside sets a @MiamiHEAT franchise-record for a half with 8 BLOCKS! #HEATCulture pic.twitter.com/Kd4dfvT40J

Since joining the Heat in 2014, Whiteside has served a potent shot-blocker, leading the NBA during the 2015-16 season with a 3.7 average per game in that category. This season, he’s averaging a career-best 14.6 rebounds to go along with 2.8 blocks per game entering tonight’s contest against the Spurs

While Whiteside has shown that prowess during his time in a Heat uniform, he’s still a long way from the all-time career leader in blocks for the Heat. That distinction currently belongs to Hall of Famer Alonzo Mourning, who slapped away 1,625 during his 593 regular season games with Miami. Entering Wednesday’s action, Whiteside was at 669.
[xyz-ihs snippet=”HN-300×250-TextnImage”]