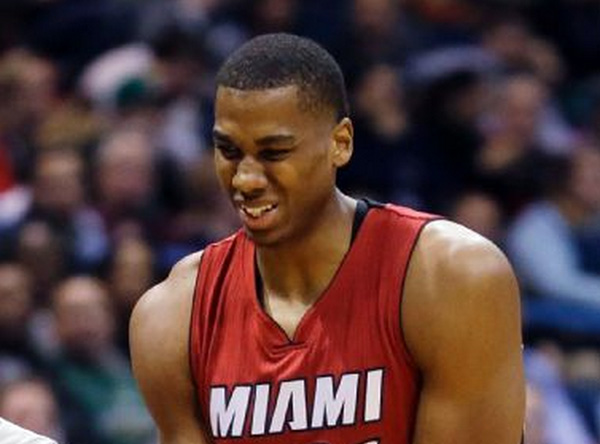 The Miami Heat’s injury woes flared up again on as center Hassan Whiteside went to the locker room in the second quarter of Tuesday night’s matchup against the Milwaukee Bucks.

While attempting to block a shot, Whiteside lacerated his hand on the rim, which left a huge gash in between his middle fingers. The cut required 10 stitches on his shooting hand and Whiteside is questionable at best for Wednesday’s game against the Boston Celtics.

INJURY UPDATE: Hassan Whiteside sustained a laceration between his middle & ring fingers. He received 10 stitches & will not return tonight.

Heat play Wednesday in Boston, putting Whiteside at least at risk for that one, as well.

It was an unfortunate incident for the young center as Hassan put up seven points, eight rebounds, and two blocked shots in just 12 minutes of action. Michael Beasley started in his place in the second half. We will keep you posted as more information is released.
[xyz-ihs snippet=”Responsive-ImagenText”]