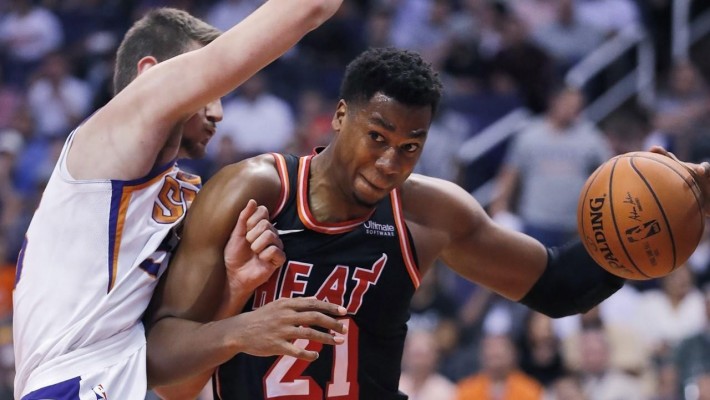 Miami Heat center Hassan Whiteside had seemingly recovered from the bone bruise in his left knee he sustained in the Oct. 18 season-opener against the Orlando Magic. After having not missed a game since Oct. 30, however, the 7-footer was held out of Saturday’s practice due to lingering pain from the injury and is questionable for Sunday’s matchup against the Chicago Bulls.

Whiteside explained that he has been dealing with the pain since he had sustained the injury over a month ago, adding that it will be some time before he is fully healthy.

“I felt it a little bit at the beginning,” Whiteside said. “It’s still been sore. It’s just been sore. So it’s going to take a while before I’m actually 100 percent back where I was, when I was in Orlando.”

Head coach Erik Spoelstra weighed in on the situation as well, saying that he felt holding Whiteside out of practice was the right call.

“I can tell just from the travel and how he was in shootaround and during the game [Friday] that he was a little bit sore,” Spoelstra said. “So I anticipated he wouldn’t be able to practice today.

“But that’s not highly unusual. He hasn’t been able to practice a couple of times the last 10 days, two weeks. We’ll just see how he feels.”

While Whiteside is listed as questionable for the game, he has stated his desire to play in Sunday’s matchup.

“I want to play,” he said. “I’m going to come out with the intent to play. You know, I just want to get a little bit of rest today because it swelled up on me.”

Whiteside has served a major role for the Heat so far this season, averaging 15.5 points and 12.9 rebounds per game. While he sometimes struggles to consistently play up to his full potential, he has given fans quite a lot to be excited about in this young season.

Hopefully Whiteside will be able to take the court on Sunday and build upon his recent success.
[xyz-ihs snippet=”HN-300×250-TextnImage”]