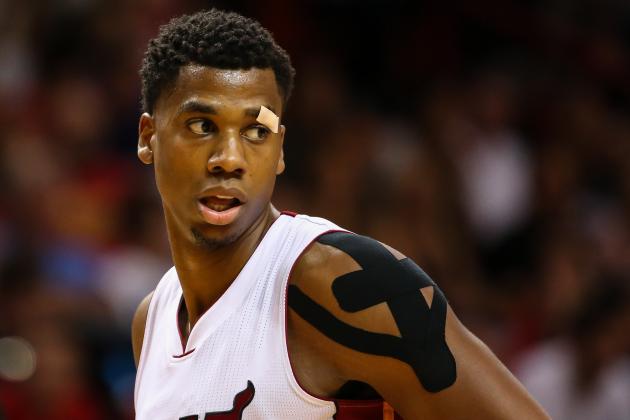 Hassan Whiteside’s knee injury may be a bit more serious than originally thought.

Whiteside missed his first game of the season in Monday night’s victory over the Indiana Pacers. While it was initially assumed he’d miss just one game, he is likely to miss another one, according to Manny Navarro of the Miami Herald.

The 7-foot center injured his right knee in Sunday’s win over the Washington Wizards but can’t remember exactly when he banged his knee during the game. Whiteside commented on the soreness of his knee:

“It’s just a lot of soreness right now. I really feel like I can’t really do anything as far as running or jumping or anything.”

While he doesn’t think the injury is serious, Whiteside really isn’t sure of the extent of his injury:

“I’m kind of figuring that out. It’s under the knee cap, around the patella tendon.”

With Whiteside sidelined on Monday night, head coach Erik Spoelstra opted to go with Chris Andersen as the team’s starting center. The move was a bit surprising considering Andersen has seen sporadic playing time during the 2015-16 season, appearing in just four games prior to Monday’s win.

The Heat will play the New York Knicks at American Airlines Arena on Wednesday night. If Whiteside is slowed down by the knee injury yet again, Spoelstra will probably go with Andersen as the starter at center.

Whiteside currently leads the league in blocks per game (4.0 average) and is one of the top candidates for Defensive Player of the Year.
[xyz-ihs snippet=”Responsive-Ad”]