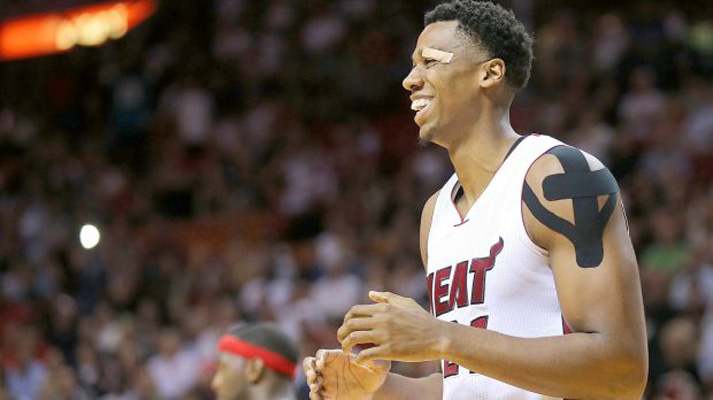 The Miami Heat may be without their center for Friday night’s game versus the Indiana Pacers.

According to Ira Winderman of The Sun Sentinel, Hassan Whiteside missed Thursday’s practice due to an ankle sprain injury:

Whiteside has a sprained ankle. Did not practice.

It is unknown how exactly the injury was caused. Whiteside spoke to reporters on Thursday and clarified when he started feeling pain on his injured ankle:

Hassan Whiteside on his sprained ankle, “I don’t really know what happened [Wednesday]. I just woke up and it was just hurting a lot.”

The 7-foot center is having a dominant season, picking up where he left off from the 2014-15 campaign. He is averaging 12.7 points, 10.4 rebounds and 4.4 blocks in just 28.1 minutes per game. Whiteside is also converting on 61.6 percent of his shots, which is good for second in the league. He ranks eighth in rebounds and first in blocks per game.

If Whiteside is unable to start versus the Pacers, Udonis Haslem or Chris Andersen would likely start in his place. Haslem has played in seven games this year, while Andersen has made just three appearances.
[xyz-ihs snippet=”Responsive-Ad”]