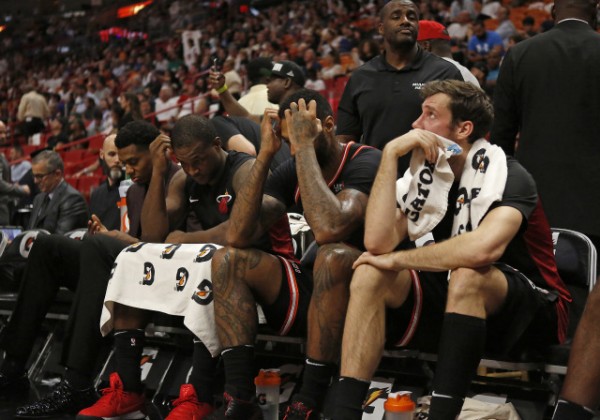 The current injury woes of the Miami Heat are such that they enter Monday night’s road game against the Atlanta Hawks uncertain about the status of two key players. That duo consists of the team’s starting backcourt in Goran Dragic and Dion Waiters.

Dragic is nursing a sore left elbow that he injured in Saturday night’s win over the Los Angeles Clippers and Waiters is under the weather due to illness.

“I’m not sure what exactly happened,” Dragic, who’s played in every game this season, said. “I kind of like hit it, hyper-extended it. It was fine after the game, but the next day it swelled up. We’re going to go see a doctor and see.”

The frustration of continually dealing with injuries is something that Heat head coach Erik Spoelstra thought he was done dealing with after last year’s nightmarish first half. During those first 41 games, Miami lost 30 games and ended up narrowly missing the playoffs.

Despite the predicament, Spoelstra isn’t looking for sympathy:

“It starts with the mentality of not feeling sorry for yourself and not making excuses,” Spoelstra said during the team’s morning shootaround. “This is the league and it’s not for the meek. Things happen. Every team goes through some stretch like this, if not more during the course of the season. But it’s an opportunity for your team to grow. Enough of the guys have been playing and in rhythm. It’s going to take a collective effort more than ever right now. No one guy is going to be able to do it by himself.”

Spoelstra’s mindset has seeped into his players, with Tyler Johnson echoing his coach:

“No excuses,” Johnson said. “Coach isn’t going to give us any. That’s the first thing he said when he talked to us today. Atlanta is a hard-playing team, but all we got to do is hold down the fort one game with no excuses and play our hardest.”

Should Dragic, Waiters and Justise Winslow be unable to answer the bell, the Heat will be forced to play Atlanta with eight players, the league minimum.
[xyz-ihs snippet=”HN-300×250-TextnImage”]