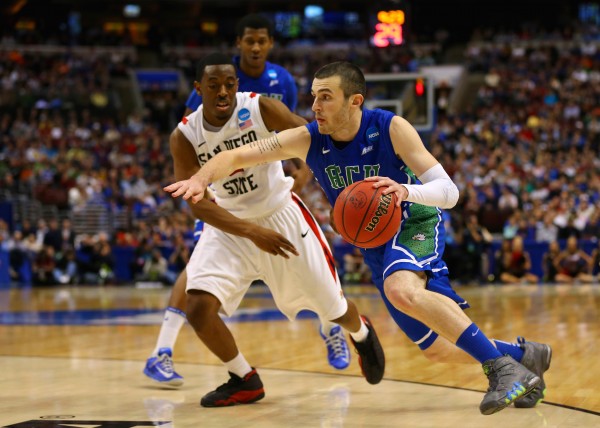 While the Miami Heat hold the No. 10 pick for the 2015 NBA Draft, it doesn’t mean that they’re not looking at all prospects heading into June.

Brett Comer, the former Florida Gulf Coast University standout point guard participated in a pre-draft workout with the Heat on Tuesday morning. He received the opportunity to play against some of this year’s best draft prospects when he was matched up in 1-on-1’s and 3-on-3’s with six other potential draftees.

Those draftees included names such as Rondae Hollis-Jefferson of Arizona and Rashad Vaughn of UNLV, who are both projected first-round picks.

Comer felt he “held his own” versus his fellow competition in the workouts:

The native Floridian commented on his overall experience, including meeting President Pat Riley:

“Obviously it’s fun, something you kind of dream of. It’s cool, growing up in Florida seeing the Heat play. It was neat meeting Pat Riley. I couldn’t be more happy that Miami gave me a chance to work out for them.”

Though there’s a good chance the FCGU product won’t be selected in the two-round draft, there’s still a good chance he could latch on to the Heat’s roster during the NBA’s Summer League and later on the Heat’s D-League affiliate Sioux Falls Skyforce. Heat guard Tyler Johnson was promoted to the Heat’s main roster after spending the first few months of the 2014-15 season in Sioux Falls.

“Hopefully I’ll get into a few more workouts,” Comer noted.