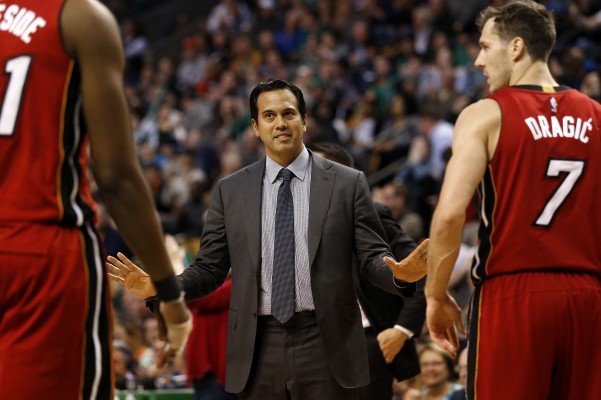 The efforts of Miami Heat head coach Erik Spoelstra to try and get an injury-plagued Miami Heat squad into the playoffs, a pursuit that came up just short, were rewarded on Sunday morning when he was announced as the co-recipient of the inaugural Michael H. Goldberg NBCA Coach of the Year Award. The award is named after longtime executive director of the National Basketball Coaches Association, who passed away earlier this year.

After seeing injuries plunge the team into a huge hole, Spoelstra helped lead the team to a 30-11 record during the second half of the season to finish at 41-41 for 2016-17 season. The team’s drive to the playoffs ended on the final night of the regular season, but could provide the momentum for a postseason berth next year.

The league’s 30 head coaches were the only voters for the NBCA award. A media panel voted separately for the NBA’s Coach of the Year award, which will be announced on June 26.
[xyz-ihs snippet=”Responsive-ImagenText”]