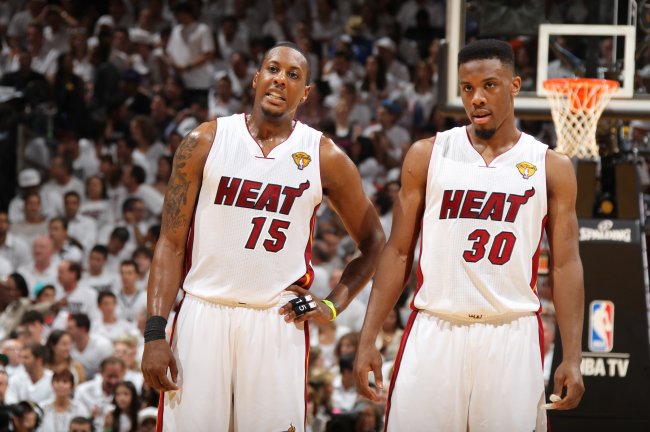 The Miami Heat don’t have a starting point guard.

The team will play six more preseason games as they look for a point who can run the offense and set up his teammates for easy baskets. Mario Chalmers started the preseason opener versus the New Orleans Pelicans while Norris Cole was in the starting lineup for the second preseason game versus the Orlando Magic.

While Chalmers has continued to struggle on offense early during the preseason and Cole has looked solid as a distributor, head coach Erik Spoelstra remains non-committed to either player as the Heat prepare to travel to Rio De Janiero, Brazil, to face the Cleveland Cavaliers on Saturday.

Within the first six-and-a-half minutes of the opening quarter, Cole dished four dimes. As the rest of the game progressed, the fourth-year guard cooled down as he finished the game with just two more assists and a total of two points on 1-of-3 shooting. Still, the young guard’s ability to set up his teammates did not go unnoticed.

“More continuity, more flow, a lot better than the first game,” Dwyane Wade said following Cole’s start in the Heat’s loss to the Magic. “He did great, he was very solid, he did a good job of getting us into our offense. Hopefully he makes our point guards tougher, if he continues to grow within the season.”

Despite coming off of the bench, Chalmers was on the court for 24 minutes, just two minutes less of playing time than Cole received. Unlike his competition at point guard, ‘Rio looked to set the tone by being aggressive in terms of scoring. He scored 10 points, went to the free throw line for six attempts, and finished the game on 2-of-8 shooting. While the field goal percentage was low, and the veteran guard failed to notch an assist, his aggression on the offensive end was a welcomed sight following last year’s disastrous 2014 NBA Finals performance.

Spoelstra commented on how he might use both Cole and Chalmers on the court for various stretches this season:

“For some stretches the way this team is built, these two guys will probably have to play some minutes together. Started to do that last year anyway and it was an effective combination for us and we’ll probably do that quite often this year.”

While much of the focus was on the offensive contributions of both players following the overtime loss to Orlando, Spoelstra stressed that he wants improvement from his point guards on the defensive end,

“That’s been a big priority for us in training camp, is our defense, and it starts with our point guard and their occupation of the ball.”

The Heat and their coaching staff will have three more weeks to determine which veteran guard gives the team the best chance to win.
[xyz-ihs snippet=”Responsive-Ad”]