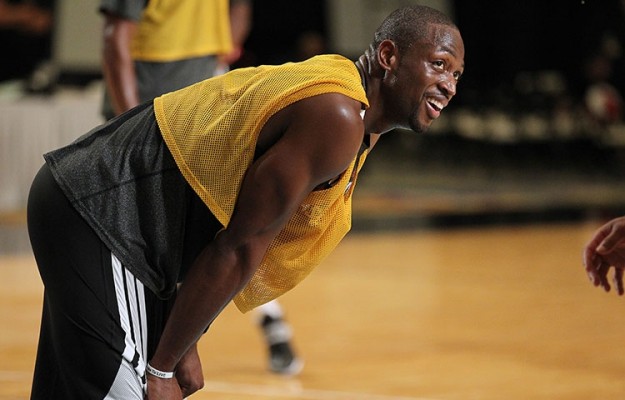 Dwyane Wade was back on the basketball court on Saturday after missing Thursday night’s victory over the Utah Jazz.

Wade had been away from the team over the past couple of days after his youngest son, Zion, was hospitalized with an undisclosed illness. The 33-year-old veteran didn’t go into detail regarding his eight-year-old son’s illness after Saturday’s practice at AmericanAirlines Arena:

“I don’t want to get into what happened, but just know that I appreciate everyone’s support. Zion is not out of the woods yet, but hopefully soon he will be. Right now, it’s just about seeing a progression every day.”

The Miami Heat shooting guard said that the past few days have been rough, as he’s had very little sleep since Thursday. Wade missed Thursday morning’s shootaround before missing the game later on that night to be at the hospital with his son. Wade did state that it felt good to be back playing basketball:

“Everybody understood why I wasn’t playing the other night. It was good getting back out here. It felt like I was off for three weeks. I couldn’t breathe. So it was good to get out here and blow it out a little bit, being out here with the guys in the midst of them talking junk to each other. We had our whole group in here today, which was great.”

It’s worth noting that Gerald Green practiced with the Heat for the first time on Saturday since being suspended two games by the organization.

Wade indicated that he expects to be available for the team’s upcoming games as long as his son’s condition improves over the next several days. The Heat’s next game is versus the Minnesota Timberwolves on Tuesday night at AmericanAirlines Arena.
[xyz-ihs snippet=”Responsive-Ad”]