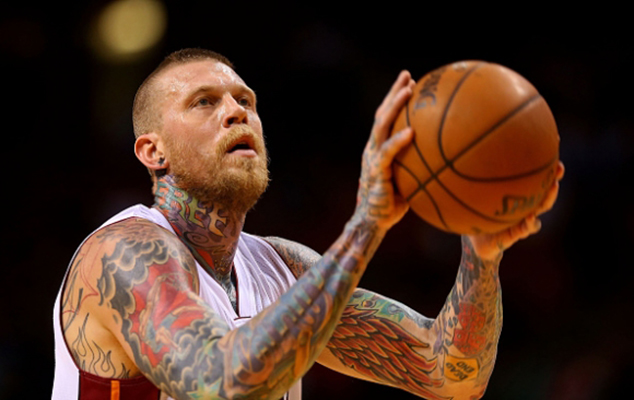 The Miami Heat’s injury list just keeps piling up. You can now add Chris Andersen to that report—again.

Ira Winderman of The Sun Sentinel reports that Andersen himself stated that he’ll be out two-to-three weeks due to a high ankle sprain he suffered versus the Charlotte Hornets last Sunday. The injury forced Andersen to miss the Heat’s loss to the Golden State Warriors on Tuesday night.

Because of said injury, the Heat have already prepared for life without ‘Birdman’ by cutting guard Shannon Brown and signing center Hassan Whiteside just a day after Andersen’s injury versus the Hornets.

The 2014-15 season has been an injury-plagued campaign for the ‘Birdman.’ After playing the first two games, Andersen has struggled to remain healthy. In a 114-96 victory over the Philadelphia 76ers on November 1st, the 36-year-old big man suffered a rib injury. The rib injury forced Andersen to miss the next five games.

In the seven appearances he made following his recovery from the injury, the veteran power forward/center had very little impact. He totaled just 13 points and 17 rebounds with five blocks during that time frame.

In nine games so far this season, Andersen is averaging just 2.2 points, 2.9 boards and 0.7 blocks per game on 43 percent shooting. He also is connecting on just 44 percent of his free throws. Those numbers are down all across the board from last season, in which the 6’10” forward averaged 6.6 points, 5.3 rebounds and 1.3 blocks on a career-high 64 percent from the field. He also shot 71 percent from the charity stripe during the 2013-14 season.